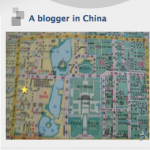 I used to write the blog Heart of Beijing from behind the Great Firewall. Every sporadically, we’ll take a blast to the past. The following was first published on January 4, 2012.

This latest from the New York Times is about President Hu Jintao’s comments regarding soft culture. Apparently China is losing the battle to the U.S. (This is where you put on your best “Gee, really?” quizzical face. Do you raise an eyebrow? Do you pout your lips and slowly nod? Do you throw both hands in the air, scrunch up your neck and gape?)

According to the article (emphasis mine):

“We must clearly see that international hostile forces are intensifying the strategic plot of westernizing and dividing China, and ideological and cultural fields are the focal areas of their long-term infiltration,” Mr. Hu said, according to a translation by Reuters.

“We should deeply understand the seriousness and complexity of the ideological struggle, always sound the alarms and remain vigilant and take forceful measures to be on guard and respond,” he added.

Those measures, Mr. Hu said, should be centered on developing cultural products that can draw the interest of the Chinese and meet the “growing spiritual and cultural demands of the people.”

Here is a country whose spirituality is that of commerce. It’s a place where an injured lady can libelously sue the person who helped her, win the case, and see the legal fallout create a dystopia-like scenario in which people avoid helping strangers unless the incapacitated peeps, “It is not anybody’s fault. I fell by myself.”

This is the society we’re dealing with, the one that Hu Jintao wants to rescue from the minor-key tunes and mild electro-synth grooves of Lady GaGa, lest China loses the rights to the zeitgeist of the 21st century.

Pop and entertainment, something the rest of the world sees as, well, pop and entertainment, i.e. mostly inconsequential, served best for leisure and diversion with a cocktail, is politicized by China’s top leader as a thing to be “on guard” against and “respond” to. (Remember all those automaton responses to political questions during the Olympics? “Don’t mix sports with politics…” Apparently pop and politics is not a problem though!)

If Hu wants to fight a culture war, his side will be massacred. The U.S. is — I’ll borrow a phrase the Chinese are fond of using — a developed country, which means its people have the time and resources to be creative. In China, on the other hand, untold millions are just trying to scrape out a living, while millions more are caught in the rat race, and millions more are dealing with the day-to-day management of ambition vs. happiness, work vs. family, making the difficult choices those in Suburbia, USA can’t imagine, not asking “Could I love him?” but, “Should I risk getting sued and help this dying man?”

But amid this backdrop, China is not a place that, despite its leaders’ best efforts, only produces mindless drones and grubs in lockstep. I see this populace’s resilience every day: normal working people who dare to call bullshit on the propaganda they’re peddled. And it’s not just me who sees it: you do too. China is a place that has produced intellectuals such as Gao Xingjian, who confronts his personal past to save his country’s soul; courageous people like Chen Guangcheng, the blind lawyer whose story could be a Hollywood movie; people for whom the struggle is not between nations but much simpler, between individuals: a struggle for answers to confirm our humanity.

There are people, in short, able and willing to produce real culture, the kind you would write home about, to question spirituality or create it, to do something people actually care about. Pardon the cliche, but theirs is art as mirror for life.

Chinese officials believe the way to the public’s heart is through “socially responsible” TV shows. As it concerns the Chinese public, they’re not completely wrong — hey, I have older relatives who are socially conservative. But if that’s what the authorities want, they should stop fooling themselves about the culture “battle,” that there even can be one. They’ve lost. It’s over. They can’t even save face by banning Western culture, because it’s one thing to censor a New York Times article, it’s quite another to tell a 19-year-old in the club what kind of music should excite them.

So here’s a proposition: that we not search for China’s version of Lady GaGa — indeed, Chinese people like America’s GaGa in part because she is as American as they come, with all those implications — but search for ways to create a society that will make the question Whose culture is better? irrelevant.

China’s leaders have made a deal with its constituents: stay out of politics and we’ll stay out of your lives. I think it’s time for our counteroffer: you can stay in power if you stay out of art and culture. Otherwise, we have nothing.