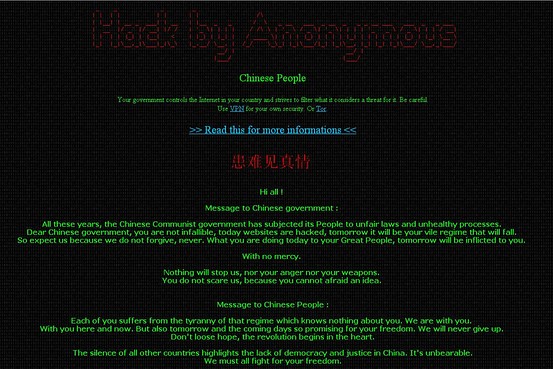 Via Wall Street Journal (also linked after the jump)

BJC is rolling out a new series tomorrow. We think you’ll like it. In the meantime, links.

I’m guessing because they don’t know Chinese? “It wasn’t clear why Anonymous chose this particular moment to launch a campaign against the Chinese government and why it didn’t hack higher-profile websites. Also puzzling was the group’s nearly exclusive use of English in a campaign ostensibly intended to appeal to a Chinese audience.” [WSJ]

That this surprises absolutely no one should be a pretty good indication that something is seriously fucked up about Chinese journalism. You know, more fucked up than you even thought. “Want a profile of your chief executive to appear in the Chinese version of Esquire? That will be about $20,000 a page, according to the advertising department of the magazine, which has a licensing agreement with the Hearst Corporation in the United States. // Need to get your top executive on a news program by state-run China Central Television? Pay $4,000 a minute, says a network consultant who arranges such appearances. // A flattering article about your company in Workers’ Daily, the Communist Party’s propaganda newspaper? About $1 per Chinese character, the paper’s advertising agent said.” [NY Times]

Completely undermining my previous point, this is actually a really great Xinhua piece. “After a total fund of 140,600 yuan was spent, I was laid there to eternal rest, but my family’s financial burden does not cease.” [Xinhua via China Daily]

Made in the USA. “It turns out that many of the most sophisticated tools used to suppress online free speech and dissent around the world are actually Made in the USA. American corporations are major suppliers of software and hardware used by all sorts of governments to carry out censorship and surveillance — and not just dictatorships…. The U.S. government is the biggest and most powerful customer of American-made surveillance technology, shaping the development of those technologies as well as the business practices and norms for public-private collaboration around them.” [Rebecca MacKinnon, Foreign Policy]

Introducing: WeiWeiCam. “Ai, never one to let politics or his own privacy get in the way of art (especially art that mocks China’s government), has decided to set up surveillance of his own. On WeiWeiCam.com, you can now watch the artist’s comings and goings from the comfort of your own home.” [C. Custer, Tech in Asia]

SOMEBODY NOMINATE ME, PLEASE! “Looking ahead to next month, we’re putting together a list of The 30 Most Influential Asian Americans Under 30…. I’m putting the call out! I already have a few people in mind, but this list won’t be very good unless I get some suggestions from you. It can be anyone — artists, activists, athletes, politicians, entrepreneurs — as long as they’re 30 years old or younger. It could be someone you’re aware of on a national level, someone in your own community, or someone you know personally.” [Angry Asian Man]

Voting is open for best Chinese blog. [The BOBs]