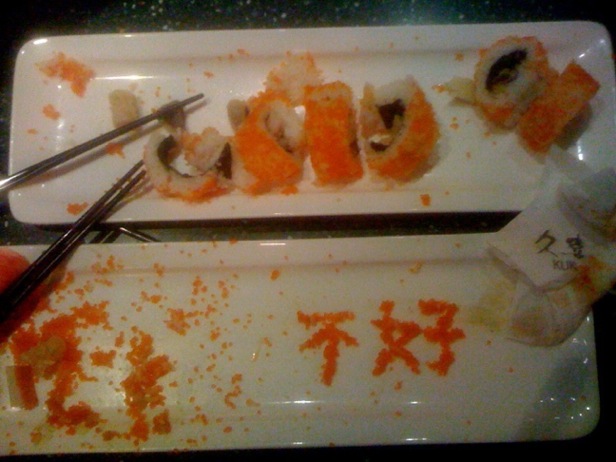 Kevin Reitz recently visited Kuki, a Japanese restaurant near Shuangjing Bridge on East Third Ring Road. He did not have a good experience.

Ordered two California rolls, the simplest sushi ever. Impossible to fuck up, one would think.

It came out just fucking packed with fish roe. Big, rupturing fish eggs smothering every millimeter of these rolls. Eating one bite felt like chewing on peanuts, crunch crunch with every bite. I told the waiter I didn’t want any roe on the second roll, and he was like, “Mei ban fa” — nothing to be done.

You know that ’80s movie Brewster’s Millions, where the guy has to spend $30 million in a month to inherit his fortune? I think it was like that: the owner got some awesome deal on fish roe, but he had to use it all within one week.

I tried to take some off each piece so I could, you know, see the sushi roll underneath. After one roll, I had all the fish eggs you see on that plate.

I decided to use a small portion of the leftover roe on my plate to write my review of the meal and leave it for the waiter. 不好 – not good.

Kevin is an Ultimate Frisbee player and drummer in Beijing. Here is his blog.

One Response to “Restaurant Review: Do You Like Fish Roe? Cause We Know A Place”

Leave a Reply to dude