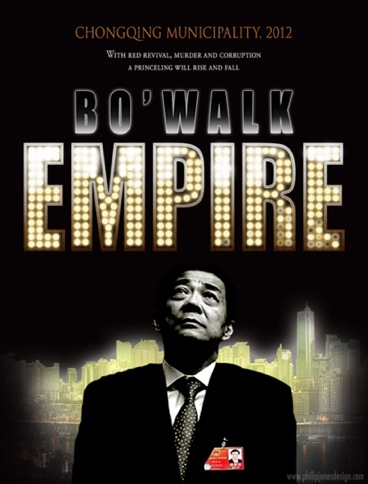 You wouldn’t know it by the pictures and stories we’ve been posting here these last few days, but it’s been absolutely beautiful in Beijing lately. Spring is a fleeting season here, so we’re making the most of it… over links.

Rumors, huh? Ya don’t say. “For China’s new generation of tech-savvy youth, who compose the bulk of the nation’s estimated 300 million Weibo users, the downfall of Bo Xilai is the largest political crisis they have witnessed. The sudden volatility of the official versions of truth on the story has left many of them deeply confused. Some see this as a victory for Weibo, which is moderated by censors but often too free-wheeling and fast-moving for them to maintain total control, over more traditional media, which is openly run by the state. ‘In this political drama that took place in Yuzhou [alternative name for Chongqing], all the media outlets were following Weibo. The power of social media is manifested here,’ user Tujiayefu wrote. User Kangjialin agreed: ‘“Rumor” is the proof that mainstream media is now falling behind Weibo.’” [The Atlantic]

In an article about Bo Guagua being surreptitiously escorted out of his luxury flat accompanied by “a female friend,” this is my favorite part: “Throughout the day a group of Chinese men were parked conspicuously in front a fire hydrant outside, breaking a basic American road law and suggesting they were unfamiliar with the country’s rules.” [The Telegraph]

If you can stand it, here’s one more about Guagua, specifically his ability to network: “As one Chinese businessman who knows Bo Guagua well said yesterday: ‘He wants to make a billion dollars and be politically important.’” [The Telegraph]

We can add to our Bo’s “family and associates” post Gu Kailai’s sisters. “Her sisters focused on business rather than politics. Gu Wangjiang, 64, the oldest, is a Hong Kong national who owns $114 million in shares of an eastern China printing company, according to a Shenzhen exchange filing tracked by Bloomberg. // Wangjiang and her sister, Gu Wangning, serve as directors of several other companies, including some that Hong Kong company registry records trace to the British Virgin Islands. They also have made millions selling Hong Kong real estate. Another sister, Gu Zhengxie, 62, was a top official at one of the country’s biggest state-owned companies.” [Bloomberg]

Finally, in what is akin to a journalist sourcing a dude at a bar sourcing some homeless guy in the subway, here’s the Telegraph quoting the Mail quoting “respected Mandarin-language websites,” by which it means Boxun: “The Mail on Sunday quoted ‘respected Mandarin-language websites’ saying Mr Heywood, 41, died from cyanide poisoning after allegedly having an affair with lawyer Gu Kailai, wife of Bo Xilai, seen until recently as a future leader of China.” [The Telegraph]

A great and fitting obituary. “After the June 4 massacre that ended the protests, the government published a list of people wanted for arrest. Fang Lizhi and Li Shuxian were numbers one and two. On June 5 they took refuge in the US embassy in Beijing, where they lived for thirteen months in a basement apartment that had no windows. On being told that Deng, in a conversation with Henry Kissinger, had said he wanted him to write a confession, Fang wrote one in the form of a forthright statement of human rights principles. In June 1990 the Japanese government negotiated the release of Fang and Li by offering economic concessions to China, and for the next nearly twenty-two years they lived in exile.” [New York Review of Books]

The dignity and authority of the law can only be bent to serve the Party. “CMP has confirmed that daily newspapers across China — including Party papers (党报) and commercial spin-offs (子报) — were instructed by propaganda authorities to publish today’s front-page People’s Daily editorial reiterating that China is ‘a nation of rule of law and that the dignity and authority of the law cannot be trampled.’” [China Media Project]

All you wanted to know about the leftist website Utopia but were afraid to ask. “Utopia’s full name is Wu You Zhi Xiang Culture and Communication Co., Ltd. and was founded in 2003 by Fan with Han Deqiang as ‘a patriotic website for the public interest.’ Fan was born in Henan, one of China’s poorer provinces, in 1976, the year Mao died, but it was at university in Beijing in the 1990s that he noticed the growing income gap…. Fan sees Utopia as defending the ‘interests of the country and the people’ against the self-interests of the reformers. Many are receptive to his ideas: Utopia claims 500 million total visits, and Fan says the site recently rose to being among the top 600 sites in the PRC. The 200,000 or so articles they have published were submitted by ‘big-city readers… mostly intellectuals who are concerned about China’s society and economy… 90 percent of them are supporters of our general idea.’” [Robert Foyle Hunwick, Danwei]

Your animated recap of the Bo Xilai saga from NMA interlude:

A 3,000-plus-word article about the People’s Liberation Army. [John Garnaut, The Age]