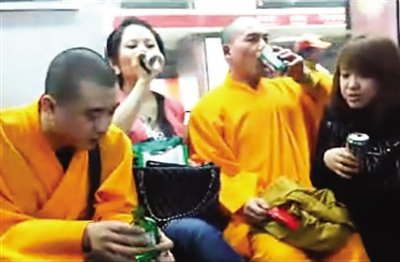 Fake monks having a lot more fun than real monks, via China Daily

China is 112 out of 156 happiest countries in the world, according to the UN. While you figure out what that means, links.

A time-honored story about a father, a 10-year-old girl, and the wolf she ends up in a cage with. Somehow, I have no idea how, the story about a girl kissing a wolf made mention of “tiger mom” and “wolf dad.” And you wonder why I was so angry. [China Daily]

“Love is Love,” and other reflexive properties. “The slogan ‘Love is Love’ has quickly reached meme status, and has been appropriated by netizens eager to express their support for the international star…. The hero worship doesn’t stop there. On the Chinese-language basketball forum Hoop China, the proposal to build a statue in honor of Marbury received over one million votes. In response, Marbury thanked netizens for an outpouring he found ‘amazing and love felt’ and promised to ‘be there for the unveiling.’” [Tea Leaf Nation]

Are we fated to see one of these “Olympic legacy” stories every four years forevermore? Signs point to yes. This story’s even got your classic man-on-the-street drive-by interview: “‘I think the building materials are very expensive and wasteful,’ said tourist Li Fang.” So enlightening. [Reuters]

Big if, eh? “If the Chinese official media are to be believed, waves of web users have been frantically clicking the ‘like’ icon in response to Beijing’s disciplinary actions against websites and microblogs for spreading false information.” [WSJ]

A conversation about how an international education might change Chinese students. “‘The irony is that if China was a democracy, Bo Xilai would probably be voted the President. Absolute democracy in China will look like Culture Revolution – Chinese people go to extremes very easily,’ added RoadforCN.” [Offbeat China]

C. Custer on Wang Wen’s column in Eric X. Li’s space on Huffington Post. “It’s especially galling because it’s not like anyone could fault China for only raising 1.2 billion people from poverty in the last 30+ years. That’s still pretty good! I’m not sure why it’s necessary to exaggerate or to suggest that anyone who disagrees with you wants to see China ‘destroyed completely.’ This sort of thing is par for the course in the Global Times, but it is sad to see it creeping into the outside world, especially when it’s not disclosed that the author works in an upper-level position at a state-owned company and almost certainly has personal ties to the Party he is so adamantly defending.” [China Geeks]

Real estate bubble? What real estate bubble? “A new article on New Fortune (新财富）reports that there are already 651 five star hotels in China, but there are about 500 more that are under construction right now. The average occupancy rate for these hotels is only 61%, the lowest in Asia.” [China Bubble Watch]

Your whiteboard interlude, via Ministry of Tofu:

Really, burning books is never okay, but certainly not over “excessive school fees.” [Ministry of Tofu]