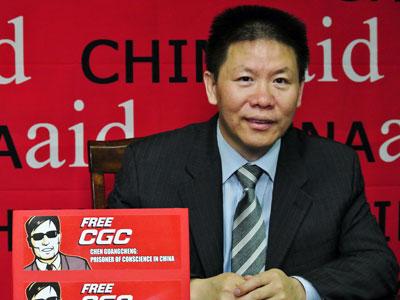 Foreign Policy, that award-winning online magazine devoted to “analyz[ing] the most significant international trends and events of our times, without regard to ideology or political bias,” just gave an evangelical pastor 1,200 words to promulgate his religious propaganda. “Like most Chinese, I was educated an atheist,” writes Bob Fu to begin his panegyric to God in a piece titled “Jesus Loves China, Too” — and thus ends the last interesting words in his abortion of an editorial.

Here’s the lowdown: Fu encourages a slow simmer approach to proselytization, noting that while China is a big and complex place — “Missionaries should study China and it’s people, culture, and history” [sic] — its people are ripe for the taking: “Especially after 60 years of communism and wave after wave of class struggle, Chinese are desperate for trust.” That, in fact, is how Fu came to embrace Jesus: he approached American Christians when he was a student, and those Christians didn’t need much more of a signal from this wide-eyed Chinese boy to realize he was ready to be taken… taken by the hands of a holy man who bestows upon him that holy soul-healing light.

Bob Fu is the worst type of Christian. Never mind, for a moment, what you think you know about his basic decency (which he might have plenty of, as someone who has experienced suffering and therefore wishes to relieve the world of pain). He is a bad Christian because his primary goal — at least as expressed through Foreign Policy — is to convert non-Christians. He believes conversion is an end to itself, that by thinking in a narrow, rigidly defined way — defined by the Gospel, if that isn’t clear — a person is able to acquire purpose and happiness.

There are Christians out there who genuinely derive strength from their faith and find meaning in God, and are generally outstanding people. And then there are people like Bob Fu, who believe life is meaningless unless there is God, who look around this beatific world and think, Such spiritual morass!

Don’t take my word for it. Here’s Fu writing about his outlook following the Tiananmen student protests in 1989:

Man, I discovered painfully, has no power to change his own nature. No amount of slogans, science, democratic reforms, or self-determination can pull us out of our pit of immoral self-centeredness.

People like Bob Fu look upon a field of yellow cole flowers and don’t think, “How pretty,” but, “Thank you, Lord, for this gift, and hang on a sec, let me round up some other people and make them thank you as well.”

Everything Bob Fu does is for the purpose of converting Chinese people to Christianity, and if you don’t think there’s something wrong with that, I ask you to brush up on history. Go ahead, I’ll wait. But even setting aside the crusades, rebellions (e.g., Taiping) and clinic bombings, there’s just simply something smarmy and repulsive about Fu’s behavior, and something offensive about his priorities. An example: “ChinaAid, the organization I run,” he writes, “attempts to advance religious freedom and rule of law in China, softening the soil for the Gospel.”

(One more example: “Demonstrate a healthy marriage, build real trust in a friendship, and invite them to investigate the life and teachings of Christ for themselves.”)

And within the same article, Fu seems confused about his own thoughts on proselytization. He writes that in the early 1990s, he met “a famous American evangelist in a five-star hotel in Beijing” who asked him, “How many Chinese Christians have the spiritual gift of speaking in other tongues?”

First of all, that’s retarded. And I apologize to the mentally handicapped, but only a true cretin could ask “How many Chinese Christians have the spiritual gift of speaking in other tongues?” with a straight face. And only someone with a wrench in his skull could hear that question and not immediately back away, hands out in front, wary about falling hostage to this stupidity.

While I don’t disapprove of this practice (and have even had this experience), it seemed that this secondary issue was his main concern.

Years later, he learned that this “famous American evangelist” – whom I imagine is a fecal cousin of Jabba the Hutt, plopping handfuls of shit everywhere he walks, and those little shits growing up to be bigger shits, who in turn spawn shits of their own — circulated tens of thousands of his book, How to Speak in Tongues, causing a divide among those who speak in tongues and those who don’t (imagine fucking that!). And now Bob Fu says this man’s ministry “deeply hurt the cause of the Gospel in China.”

Instead of pausing to wonder about “the cause,” Bob Fu immediately contrasts that evangelist with “the two Americans who showed up at the doorstep of my in-laws in a remote village in Shandong, near where legal activist Chen Guangcheng used to live.” (This is the first of only two mentions of Chen Guangcheng in the article, by the way; one almost feels that Fu is using Chen to drive his own agenda.)

Those American teachers even learned how to share an outhouse with pigs!

Gasp! Atheists probably would have slaughtered those pigs with their bare teeth and dined on the entrails of all that is holy.

As a result, both of my in-laws came to Christ after my American teachers left.

Oh Jesus Christ On A Raft.

I’m not using the Lord’s name in vain because Bob’s in-laws went to Christ — I don’t care about that, or what people believe. Rather, there is a pathetic, hackneyed narrative here, a favorite amongst snake charmers like Bob Fu: the story of the unenlightened savages who live in drudgery and mud (or pigsties, as it were) in need of clean, upstanding men from first worlds to instruct them, to make them see the error in their ways, to give them light for they live in darkness, to release them into good for they are bound by the ignorance of evil. There is always that Manichean divide, isn’t there? Not that pagan yin and yang shit, no, we’re talking about angels and demons, heaven and hell, God and no God.

In the Bible, the book of Romans says, “Love must be sincere. Hate what is evil and cling to what is good and always serve each other in love.” With this kind of message, Christianity will blossom. This is the only way freedom — both individually and nationally — will spread in China.

Even his use of the word freedom is obnoxious, implying that 1.4 billion people in China currently live like rats in cages. If only Bob Fu could experience the real world from the ground, where reality is a bit more complex, and colorful. If he ever learned to see beyond the chiaroscuro that is his conception of belief, he just might find a second way for Chinese people to achieve fulfillment. Would we be saved? No one can know. But we would at least be spared from Bob Fu.

8 Responses to “Bob Fu, Who Was Instrumental In Freeing Chen Guangcheng, Can Shut Up Now”

Leave a Reply to zj