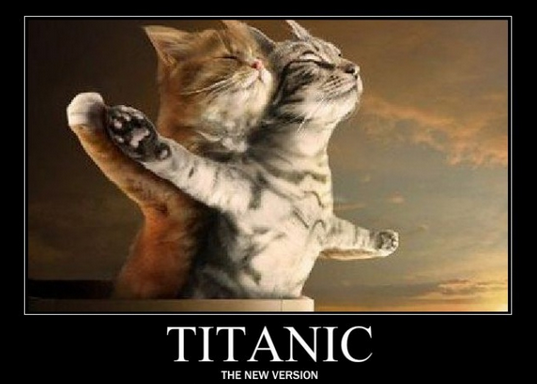 WTF moments are frequent in China; they can happen just reading a newspaper. Today’s chin-scratcher occurred on page five of the Global Times, where, sandwiched between an only mildly splenetic front-page story about Chen Guangcheng (Chen will not have “any problems as long as he obeys the law and expresses his demands lawfully,” an expert confidently concludes) and a story about a zookeeper performing emergency annilingus on a constipated monkey (I shit you not), came this bazinga:

Not an ill-conceived movie, mind – that’s already been done. An actual cruise ship.

A Chinese State-owned shipbuilding company has confirmed it has signed a preliminary agreement with an Australian mining tycoon to build a new Titanic… According to [Clive] Palmer, the new ship will be as big and luxurious as the original Titanic, which had nine decks and 840 rooms and sank on its maiden voyage in April 1912 after hitting an iceberg.

Wait. It gets worse.

Lin Guolong, a logistics professor at Shanghai Maritime University, told the Global Times that construction of Titanic II may still be a long way off.

“Besides, the requirements for cruise ships are much stricter than before to ensure passenger safety, so the construction work for Titanic II will not only need a large sum of money but must also meet current regulations,” said Lin.

China already has a slightly twisted relationship with the Titanic mythology. Although it is perfectly capable of marshaling public decency concerning one of its own (usual man-made) disasters, like mudslides, droughts and quakes, People’s Daily seems to view the Titanic sinking as some kind of affront to its claims of China owning the mantle of “world’s worst maritime disaster” – the sinking of the SS Jiangya, which “once killed 2,353 people,836 more than those in the Titanic accident, therefore claiming the biggest victim number” [sic]. Why it so fervently wants this title is a mystery bigger than the fictional fate of the Coeur de la Mer.

But what we have here is an apparent double dose of hubris and misguided megalomania. Not only do the Chinese want co-rights to any seafaring “sequel” to the Titanic tragedy, they’re employing shipwrights who “have much more experience in building cargo ships than cruise ships,” and they’re relying on “current regulations” to see that happens safely.

Asked about whether the the ship will be safe, Palmer basically said yes, “But of course if you are superstitious like you are, you never know what could happen.”

Let me be the first to bet away my steerage seats on a crappy poker hand and allow someone else – perhaps a talented and winsome young artist? – to take that maiden voyage for me. We won’t bother to go too much into the sensitivity issues here of Titanic 2 – it’s a harebrained idea, naturally. There’s a good reason why no one bothered to inflate a Hindenburg 2 and it’s not just because of foolish superstition. That said, this whole thing seems unlikely to ever really happen: “The formal contract has not been signed and the details also need further discussion,” PR man Li added.

Need we remind Clive Palmer about Stern Hu? Never mind ruling the waves, these boys don’t even have rule of law. This one’s probably best kept in Davy Jones’s locker.

3 Responses to “Unable To Convince World The SS Jiangya Was A Worse Maritime Disaster Than The RMS Titanic, China Seeks To Build Titanic II”