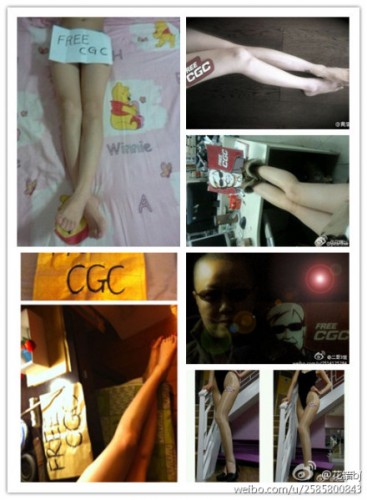 We promised interesting non-Chen Guangcheng links in our Chen Guangcheng links post, but we start with one more bit of Chen news: according to Beijing activist @zengjinyan, Chen never wanted to leave the US Embassy, but his wife told him he should otherwise she and their children would be “sent back to Shandong.”

This would deserve its own “today in shitty journalism” post if Bo Guagua weren’t completely last week’s news. “Though [Bo Guagua], 24, is known to lead a lavish lifestyle, many of the details in the public account of that evening turned out to be incorrect, according to interviews with the son; Abby Huntsman Livingston, a daughter of the ambassador, Jon M. Huntsman Jr.; and three others present at the dinner. // The interviews help reveal how what began as gossip made the rounds in expatriate circles in Beijing until it became an accepted truth about the Bo family. One person who told the version of the story that eventually surfaced was Mr. Huntsman, who ran for the Republican presidential nomination after his stint here as ambassador.” [NY Times]

Any other week, this scandal dominates. “IT Time Weekly, a Chinese commercial magazine, reported on April 20 that some employees at Taobao, a unit of Alibaba Group, have taken bribes from online shop owners and secretly helped them remove consumers’ malicious comments and raise credit ratings.” [China Daily]

Headline: “Zoo Caretaker Licks Monkey’s Butt To Help It Defecate.” What more is there to say? How about the fact that Global Times ran this story and cited chinaSMACK when the story actually came from NetEase? Weird, huh? [chinaSMACK]

Some Guilin girls: kinda bitches? “If you are visiting Guilin during this May Day holiday, better watch out for those who make the hard sell. In tourist attractions in Guilin, South China’s Guangxi province, a group of women wearing traditional ethnic dresses stand at the entrance every day and badger male visitors into taking photos with them. Some visitors that cannot ward off the strong arm submit.” [Ministry of Tofu]

Just in case we’ve forgotten, Gu Kailai is still around (in another anonymously sourced “exclusive” from Reuters). “A few days after Heywood was killed in Chongqing, southwest China in November, Gu strode into a meeting of police officials wearing a military uniform and gave a rambling speech in which she told the startled officials that she was on a mission to protect the city’s police chief, Wang Lijun, the source said.” [Reuters]

Corollary: “The demonization (妖魔化) of Bo Xilai’s wife Gu Kailai continues, with Reuters reporting in Bo’s wife dressed as Chinese army general after Heywood death that she showed up to a meeting in a PLA uniform and talked crazy. I assume we will soon see stories of her sexual proclivities, possibly including horses (pandas wouldn’t really work)?” [Sinocism]

Your Shaolin monks are ridiculous interlude:

Your silly China Daily editorial of the week: “Training in etiquette is a vital first step.” [China Daily]