Until I actually saw the sign over the stage, I thought we were going to the Midi Festival. You’d think the fact that we were entering Ditan Park — I was pretty sure the Midi was somewhere on the west side — would have been enough to clue me in, and it looked more like an open mic night than the city’s biggest music festival of the year. Where was the phalanx of 15-year-old bao’an flanking the stage in case a mad throng of Chinese rock fans charged en masse? Something was seriously wrong here.

Of course, after Yasiin Bey (The Artist Formerly Known as Mos Def, also known as Dante Smith), opted out of his show (or depending on who you talk to, was forced to cancel by the Chinese government), I shouldn’t have been that disappointed to skip the Midi: the lineup, minus a few big-name headliners, is always dominated by Chinese punk acts. But when my girlfriend told me about the cancellation, I didn’t realize we’d be covering a completely different festival now.

I was about to be pleasantly surprised.

(By the way, what promoter thought it would be a good idea to bring Smith to Beijing? This is a politically active Muslim rapper who has a problem with authority. If the government wasn’t going to shut him down, his history of canceling shows [more than a dozen in the past two years] indicated he was never likely to land in China.)

In any case, when I saw the giant Dong Party sign, I knew I was at a Chinese music festival, just not the one I planned for. My friends immediately informed me there would probably be more media in attendance than actual music fans, and when the first act stepped onstage, a Chinese guitarist I’m pretty sure I saw busking in a subway last week, I figured they might not be far off.

But as the afternoon progressed, the crowd filled out (300 to 400 people with an even mix of Chinese and expats) and the bands got bigger. The scene was laid back. Security seemed most preoccupied with stopping people from smoking, an unheard of blessing in this city. The crowd was there to hang out with friends and family, picnic in the grass, and listen to music. Every person I asked gave their reason for coming as some variation of, “It’s a lot closer than the Midi Festival, and cheaper.” As American Candice Lee put it, “This is the music festival for lazy expats.” 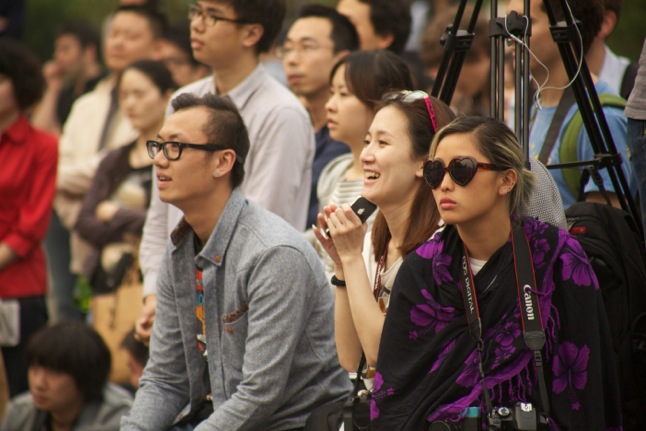 The crowd enjoying themselves at the Dong Party

Irrespective of all that, the music turned out to be excellent and eclectic. The festival, previously known as the Ditan Music Festival, branched out this year with Chinese rock, African dance, and Brazilian guitar music. There was some all-original bluegrass with the Randy Abel Stable, and world music from SoundScape, with musicians from Iran, France, Canada, and China. None of the music was so hard as to make people expecting folk music cringe, but rock fans who were interested in moshing had a couple of good options as well. 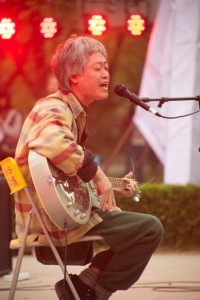 The highlight of day one was the Chinese musician Xiao He (pictured). My girlfriend first pointed him out to me, saying she thought he must be famous because people kept getting their picture taken with him like he was a Swede at Tiananmen Square. To me, he looked more like one of the Ditan Park regulars who hangs out all day doing tai chi or kicking a shuttlecock. But when he got onstage, just him and his steel guitar, he had the whole venue dancing and singing along. He was worth the price of admission all by himself.

The second day ended with minority musicians Traveler (旅行者). They played urgent, driving songs on a mix of traditional instruments, with plaintive singing that would have echoed hauntingly on the Mongolian plains. If you weren’t lucky enough to see them at Ditan, they’ll be playing Thursday night at Jianghu Bar just off of Nanluoguxiang.

In the end, the Dong Party turned out to be one of the best musical events I’ve been to in China — and I’ve been here for 12 years. Next year, even if Yasiin Bey does make it to the Midi Festival, I’ll take the lazy route and join all my hipster friends at Ditan. And I’ll be sure to bring my hula hoop: