When I was younger and had hope, “The Cask of Amontillado” was my favorite story, mainly because readers are never given a clue as to the offense committed by Fortunato to warrant such hatred.

Similarly, I shall not mention the offense committed by Jonathan Kos-Read to merit the proceeding onslaught. However, I will endeavor to be as professional as possible.

Now, here is a doctored photo of him at the entrance to Birkenau, taken from a folder on my desktop entitled DIE JONATHAN DIE. 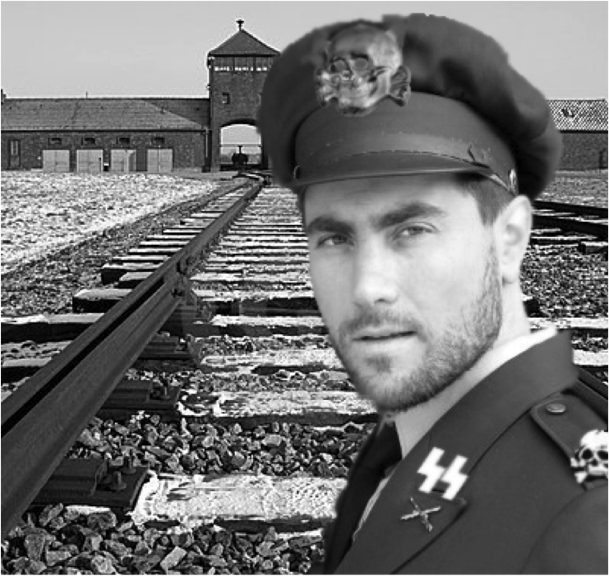 For those of you who don’t know him, Kos-Read is a professional actor and knob head. He – and I’m quoting the LA Times here – is the “token white guy” in Chinese films and TV shows, which about exhaustively sums up his contribution to cinema. I have sourced at least four independent articles that all have the words “token” in the headline.

Kos-Read does have some good points though, and in the interest of fairness, here they are:

1. I’m told that he is physically attractive.

2. He speaks Mandarin quite well.

3. There are so many photos of him online that he is a Photoshop smorgasbord.

Here he is in a truck chasing Forrest Gump: 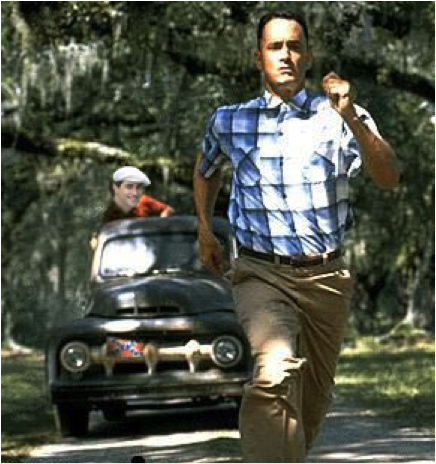 Here he is bitch-slapping the lovable Bernie in Weekend at Bernie’s: 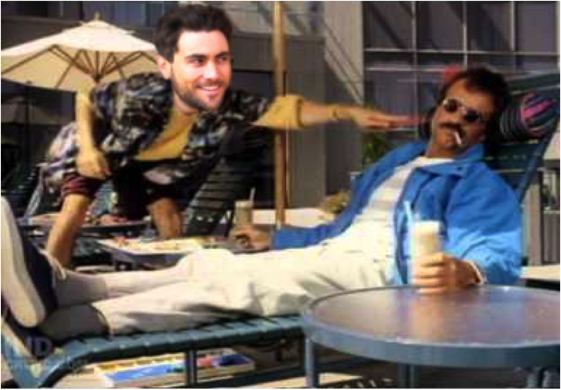 Here he is supporting the motion to sweep the leg with the Cobra Kai Dojo: 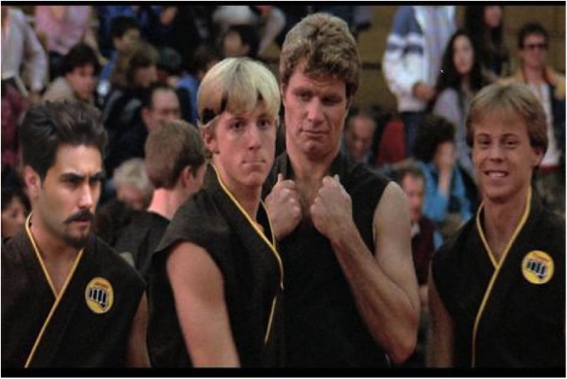 Here he is as a zombie Nazi in Call of Duty: 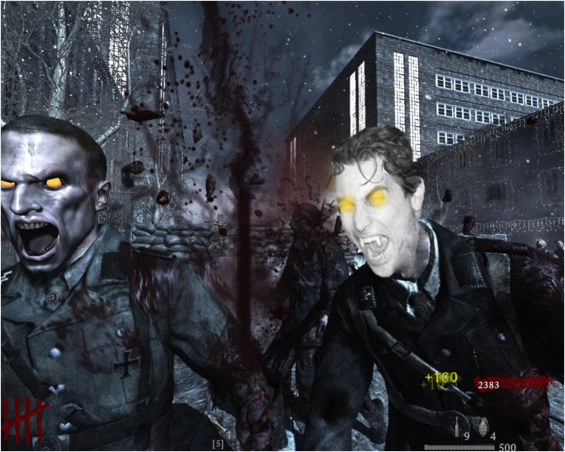 And here, scandal of all scandals, he is in the midst of a torrid love affair with Jar-Jar Binks: 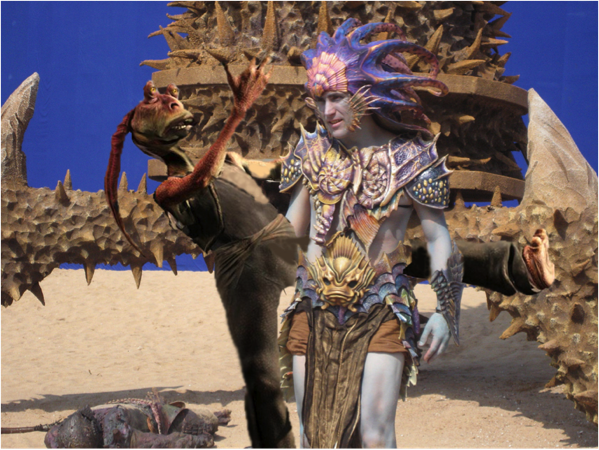 4. Um. We don’t know that he’s committed any felonies.

Jonathan set off for China in 1997, and when he began acting, he noticed that the other foreign actors “looked funny,” had “crap Chinese” and were amateurish. “I went to acting school, I speak pretty good Chinese and I may not be a 10, but at least I’m an 8,” he told the LA Times. He spun a similar yarn in a BBC interview, but instead of “funny-looking,” he called his counterparts “short and skinny and not representative of the America I knew.” He also pronounces “niche” as “nitch,” which is extremely irritating.

I don’t know much about acting. Nothing, really, so I can’t speak on that score. However, I always imagined an 8 as Ned Beatty or a Harry Lennix. Not this: 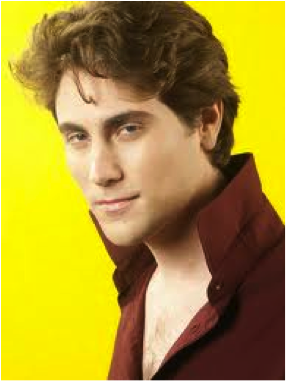 His self-assessment may be pompous, but one can’t deny Jonathan’s popularity in China. He carried the flipping Olympic torch. But then again, we all know how easy it is to please the Chinese press, don’t we? As long as you don’t express an opinion contrary to the Party or say something stupid like, “Chinese medicine is a load of old bullshit,” then you’ll be fine.

Foreigners here in Beijing are a little more discerning, if not punishingly judgmental.

The list for JKR hate is long, but one article stands out among the rest.

Long, long ago, in a Beijing far, far away, there was an article. A Global Times article, no less, that told of the horrors of working with Jonathan Kos-Read. The article is from a Michele Scrimenti, and caused a bit of a stir. It has since been scrubbed from the GT site and from the Internet in general. For my money, there never was a better GT article published. Again, it no longer exists online, but here’s how it began:

“I just saw the latest draft of the article. You’ve got a lot of work to do.” I looked at my phone and I was pissed off. This was the third time I’d sent a draft to Jonathan of the story about him, and this was the third time that he’d responded with a cryptic, cutting remark. I think the last time he said something like, “This article is a fucking disaster,” and didn’t elaborate.

It was a stupid idea to write the article in the first place. Jonathan scribbles in his spare time himself. Hell, he writes for at least an hour a day, runs a weekly writer’s group, and is working on a novel. He almost writes more than I do, and I’m supposed to be a professional journalist.

When asked about his proficient Mandarin, Kos-Read said: “Language is like a sexually transmitted disease… you get it in bed.” He went on to explain: “Bang every Chinese girl you meet… get a Chinese girlfriend, you idiot.” And his early mantra: “I’m Jonathan! I’m awesome!” And: “I’m more interesting in real life than any of the characters I play.”

It’s hard not to take cheap shots at such a smarmy tit-a-ma-boob who says such things. Which is good, because I don’t like to do hard things.

But I know nothing I say will bother him, as he revels in attention and criticism, and criticizing someone makes them yet more famous. As an actor, he likely breaks out in a terrible rash if no one pays attention to him for five minutes. Back in the day of Google Buzz, he actually wrote these things on a thread in which he’s mentioned:

Would that be okay? And if it is do you want me to change your names?

@Funwick: i’d also like to use your comment about fame as a face eating mask. That be cool? Ditto as above on the name change if you want.

Free opportunity to insult me in print.

These comments are shuttled into his column in Shanghai’s Talk Magazine called “Token White Guy: Writing About Writing About Me.” He invites criticism as if it rolls off him like water on a duck’s back, a dead duck that has been strangled for being unbearably smug. Excerpting (inconsistent punctuation usage his):

So now, two weeks after it got published I have:

A movie option on the rights to my life

Another interview on National Public Radio

Talks about a reality TV show about my life

Ditto on a documentary about me.

Ditto on a TV series based on my life

My knuckles cracked reading that. He said “ditto.” Ditto. In case you missed it, in that article he mentions people who snubbed him at school having since come begging for some Kos-Ass on Facebook. Girls. He actually boasted about that. The insecurity and despair is naked.

Almost enough to make you want to stop making fun of him… almost. Not even almost, really. More of just an urge to have a smoke break.

In another piece, “How To Be A Jew,” he writes:

These questions were on my mind last month because I just got cast in a show where I play one. It’s this big 40-episode monstrosity about 50 years of Shanghai history. I play a Jew who goes there to make his fortune but instead finds love. It’s a rich, complex, genuinely good role that begs for a serious actor.

His career as a blogger in Talk ended abruptly afterward.

This all wouldn’t be so unbelievably infuriating if it weren’t for the universal fact that there is a finite amount of happiness and attention in the world, and this douchepocalypse gets more than his fair share.

Just ruminate bitterly on that for a bit. This guy… 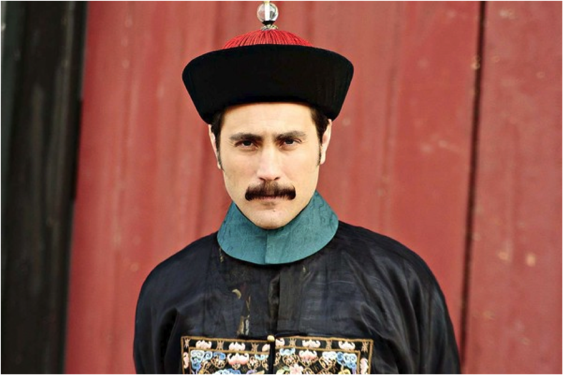 …probably has more stuff than you.

Some may accuse me of jealousy, but truly, for all the money in the world, I would not sink to such depraved boobery.

Ironically, his Chinese name is Cao Cao, the name of the militaristic and antagonistic tyrant during the Three Kingdoms period. Just think on this: what kind of muppet names himself after a villainous warlord? It would be like calling yourself Slobodan or Bert Mugabe. The real Cao Cao, the military genius who hoped to see a united China, wrote:

Jonathan Kos-Read did this: 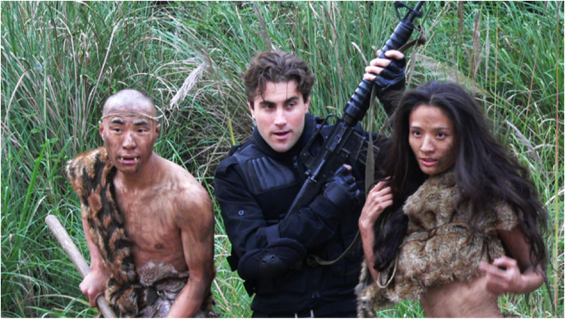 The connection between the two is not abundantly clear to me. But I digress.

Jonathan is also an amateur photographer. You can see his casting call for models at ModelMayhem.com, where he states, “I never shoot for money. Acting is an artistic job. I betray it for a paycheck. So I keep this part of my artistic life pure. I know not everybody has that luxury so if you need money, I pay. If you’re a model and want to shoot, just email me.”

My research into Jonathan Kos-Read has led me down dreadful depths. I’ve even looked at his damned Amazon review page. I know that he didn’t like the book Chariot: The Rise and Fall of the World’s First War Machine, to which he said, “Just a list of facts – no discussion of the theory of chariot warfare.” He’s even featured on the Tumblr Beardlover. HUH? What the hammer, what the chain?

There is so much more to cover — I didn’t even touch upon his body of work. But alas, I am covered in douche juice and must retreat. So, what do we know about Jonathan Kos-Read with absolute certainty?

“The thousand injuries of Fortunato I had borne as I best could, but when he ventured upon insult, I vowed revenge,” says Poe’s narrator, who lures Fortunato to the catacombs. If I could only do the same, metaphorically speaking, to JKR, and without wasting that good wine. So much the better, probably, to just ignore him.

28 Responses to “For Your Consideration: Jonathan Kos-Read Is A Turd”