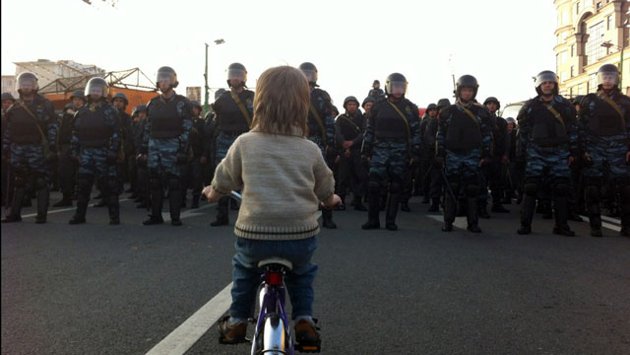 Julia Ioffe, a journalist in Moscow, took the above picture with her cell phone on Sunday in Moscow and tweeted it to her nearly 6,500 followers with the message “Russia’s Tianamen image” [sic]. Reports ABC News in an article headlined — without any trace of irony — “Boy on a Bike Becomes Moscow’s Tiananmen Image”:

Tens of thousands of protesters had marched against Putin that afternoon, the day before his inauguration. They were met by row after row of police, thousands of them, who were there to make sure they stayed within the bounds of their rally permit.

It’s a skirmish, not a riot, and there have been no deaths. And how did Ioffe get this “iconic” image? (“Iconic” is ABC News’s word; at first I read it as “ironic,” which would have made more sense describing Ioffe’s tweet.)

[Netherlands TV reporter Olaf] Koens says he wanted to take the picture himself, but his iPhone battery had run out an hour earlier.

“This little boy just showed up. His parents were somewhere in the crowd, there was no immediate danger, and the kid just kind of peddled (sic) up to the police, probably out of curiosity,” he wrote in an email to ABC News.

In other words, I think we have the answer to the question posed in this post’s title: 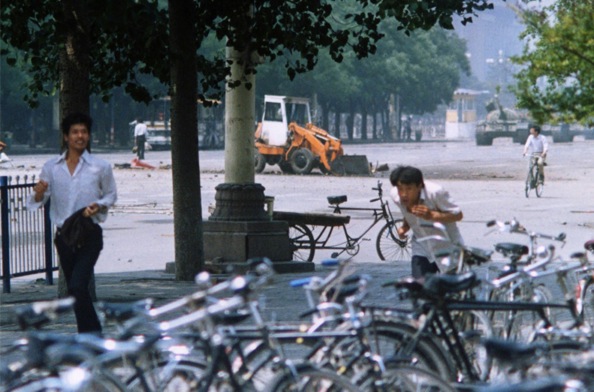 For more about this picture, see NY Times’s Lens blog.

4 Responses to “Is This Boy On A Bike Moscow’s Version Of Tiananmen’s Tank Man?”