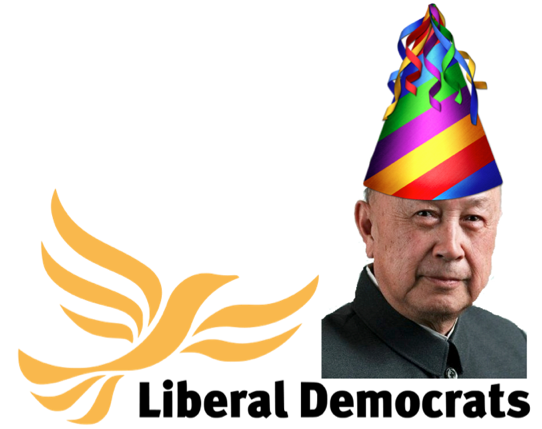 A possible emblem for the Chinese Scientist Liberal Democratic Party

It looks like someone not only watched last year’s The Founding of a Party, but actually paid attention. A group of Chinese scientists are rumored to have “founded” the Chinese Scientist Liberal Democratic Party [中国科学家自由民主党], news of which we first noticed in the Chinese edition of Epoch Times on May 1.

The Epoch Times, as parlance goes, is an “overseas dissident publication” that makes claims which are often difficult to prove, and we wouldn’t give much credence to this story if not for the rate at which censors are deleting posts about it. A thread on Baidu’s forum, in which netizens were relatively supportive of the idea of a second party, now returns the message, “Very sorry, your requested forum doesn’t exist.” Here‘s another Baidu forum on the subject that’s now gone. A page about the SLDP (or whatever the acronym is supposed to be) on Baidu’s Wiki-like section, Zhidao, has also been expunged. And don’t even think about finding it on Xici.net or Kdnet.com – finding it anymore, that is.

However, there are still traces on the Hong Kong-headquartered portal China.com, specifically this thread from yesterday afternoon (currently with nearly 19,000 views) titled, “China discussion: Dawn of a new era is upon us! Reporting big news!” The top post: “Beijing intelligentsia recently founded the Chinese Scientist Liberal Democratic Party! It’s enabled me to see the dawn of a new era of Chinese politics!” One of the commenters wrote, “There are eight parties [under the CPC], what’s the harm in another?” Most, however, lean toward apathy — perhaps why the thread is allowed to exist.

Democracy, protection of citizens’ freedom and a government with separation of powers are among the new party’s core values, according to the now-deleted Baidu Zhidao page, and “its new charter will be released soon,” said one of the founders, the pseudonymous Liu Ye [刘烨] (he is quoted as “Liu Yi” [刘义] in other places). Are these stirrings the sign of political troublemakers rising from their murk, or, as it were, nothing at all?

Around 30 young scientists from the Beijing-based China Academy of Science, who pursue social justice and advocate democratic reform in China, founded the party, which seeks to turn over the CCP’s “dictatorship” and set up a constitutional system with a peaceful approach, sources said. [Ed's note: isn't that what we are supposed to have already?] And all this despite a front-page headline in the Global Times last year that read: “No Need for Other Parties: CCP” (repeat, this wasn’t a China Daily Show headline; we laughed about it, but now can’t seem to find it online).

Interestingly, Minister of Civil Affairs of China Li Liguo announced in a press release on May 8 that, “There will be reforms on the organization registration system in the future… and registration for human rights and political organizations will be managed equally.” It is not known if this announcement was in any way related to CCP awareness of the upstart party and thus an attempt to crap in their salad.

Briefly, some context: there are eight minor parties under the Communist Party of China, with the youngest one being the Revolutionary Committee of the Chinese Kuomintang, founded in 1948. Again, that’s youngest. There has not been a new party in this country since 1948, so officials are predictably wary about people who try to break this, ahem, stability. Crucially, the two questions we are unable to answer are: Who are these scientist founders? and, Why does anyone want to start a new party in China? Slightly modifying the words of that China.com commenter: There are eight parties under the CPC, what’s the point in another?

We confess doubt as to our ability to bring you further updates. After all, despite the supposed success of the state-backed movie, the tagline of The Founding of a Party, as far as we could tell, was, “Don’t try this at home.” Should any information leak through the cracks, though, we’ll let you know.