Only two weeks ago, a reckless Chinese driver in Singapore plowed into a side of a taxi, killing both cab passengers and himself (GIF credit: Alicia). We now have more of the same. (And in case you needed a reminder — there’s a lot of the same.) On Shenzhen’s Binghai Road on Saturday around midnight, a speeding red coupe crashed into two taxis, causing one of them, an electric BYD, to erupt into flames (all three passengers in that car perished). A passing cabbie caught video of the fireball. The driver and passenger of the other taxi, which was flipped upside-down, both crawled out. The coupe’s driver — who was apparently going in excess of 150 kilometers, according to the guy who shot the video, and apparently had been drinking, according to Shenzhen authorities — was a young man who had three young ladies in the car with him. He fled the scene with two of them (the other was pinned inside the car), but later turned himself in. Sina video for those in China after the jump, plus update.

UPDATE, 10:21 am: Here’s a picture of the two passengers in the electric taxi that exploded, according to a Sina Weibo post that’s gotten more than 2,800 forwards and 1,100 comments in less than two hours (it was posted at 8:25 am): 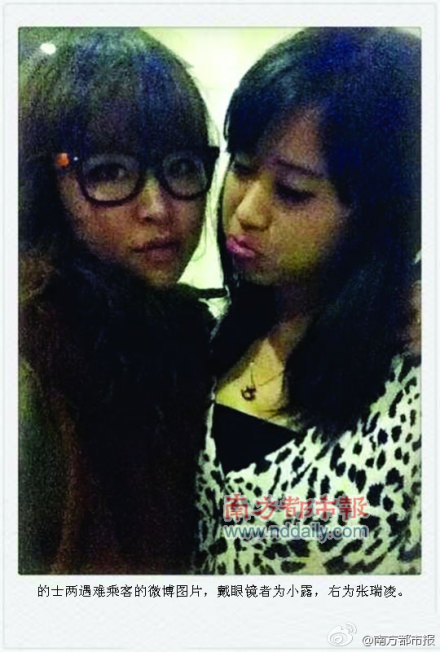 UPDATE, 6/8: A story in Reuters says the BYD explosion may have been caused by a leaky battery (h/t The Nanfang).