This was taken last night by my friend Kris Pickett on the street just north of Chang’an Jie (Avenue of Eternal Peace) near Xidan, about three miles west of Tian’anmen Square (the big building in the background is the Xidan Book Mansion). Kris happened to be walking underneath a pedestrian bridge when he noticed a man with a sign logging a formal complaint. He was unable to get a close look at the sign, though he says he saw the words “Hu Jintao”; in the pictures after the jump (where a Youku video is also embedded for those in China), you can clearly see the words “Hunan province”; everything else is too blurry to decipher (note to protesters: please use bolder fonts).

Kris waited for about five minutes as a crowd formed. A passerby shouted stuff up at the man on the bridge, cursed him, then called the cops. Firefighters were brought in to inflate a bouncy tarp and position it underneath the man. The rest you can see in the video — how police pull themselves onto the bridge, slowly advance on the man, then finally push him off. The whole ordeal lasted about fifteen minutes.

According to Kris, most of the gathered onlookers were supportive of the protester — whatever he was protesting about. Some even gave lip to the cops. Told to move back, one person (audible in the video) retorts, “Where should we move to?” Others told Kris, “Put this (video) on Weibo!” Another said, “One man brought all these cops out!” One person apparently demanded of the authorities, “Why are you doing this?”

The answer seems self-evident: the guy was disturbing the peace… harmony… stability. Perhaps just being generally crazy. Unfortunately in this country, there’s not much of a difference between the two. 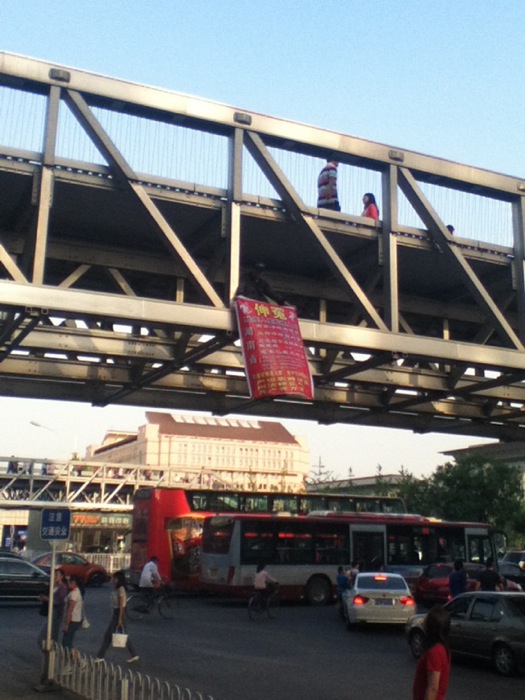 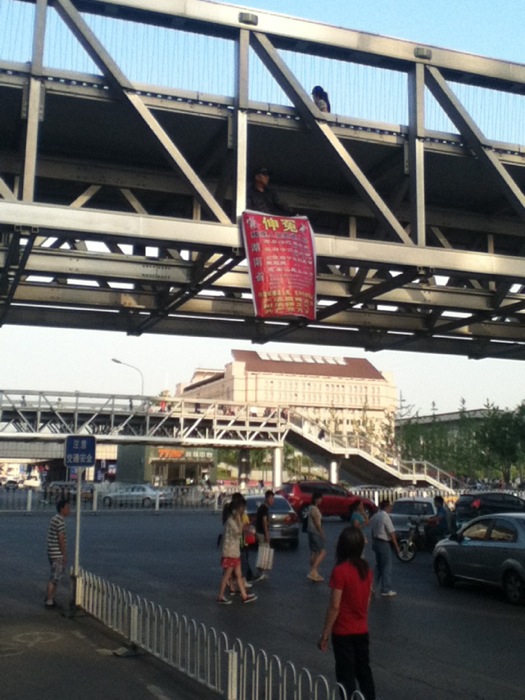 3 Responses to “Watch: Protester At Xidan Pushed Off Bridge, Then Taken Away In Police Van”