What a waste. Barely nine years old, the Green Island Stadium in Shenyang, Liaoning province — known as the biggest indoor stadium in Asia, occupying 455,000 square meters with 30,000-plus seats — cost nearly 1 billion yuan to build (including more than $1 million [6.4 million yuan] for the turf alone, according to Shenyang Daily), and now it’s Asia’s biggest rubble heap. Yesterday, demolition crews put down this King of Albatrosses, leaving a mess that will take several more months to tidy.

Afflicted with the architectural equivalent of gigantism, Green Island was a freak of a structure situated in a nondescript place (i.e. not Beijing or Shanghai) that neither needed nor could support such a behemoth. Its biggest claim to fame, best I can tell, was hosting Olympic group stage soccer games in 2008, but vestiges of even that soupçon of glory was fleeting — as of demolition time, the field had been removed. That the stadium didn’t even survive until next year — when Liaoning is scheduled to host China’s National Games — should tell you all you need to know about the unmitigated diaster that is its management. People were simply given no reason to care. A search on Google yields an anorexic Wikipedia entry, and a search on Baidu yields only a little more, like this Sohu article that says “100 old fans bitterly spent five hours at the scene to bid farewell to Green Island Stadium one last time.” And why did they spend five hours there? Because, the article tells us, the demolition was delayed four hours due to weather.

At least the demolition went off without a hitch. And all it required was two tons of explosives and, depending on the source, 3 to 5 million yuan. 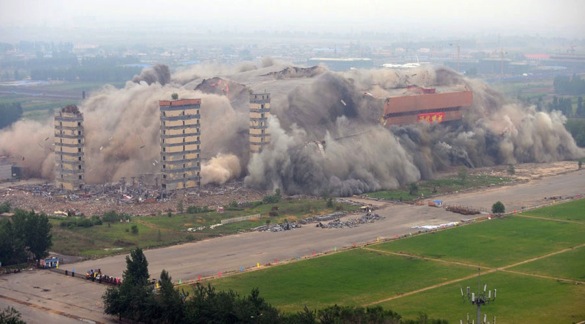 Via CRI; for more pictures, see NetEase’s series of photographs.