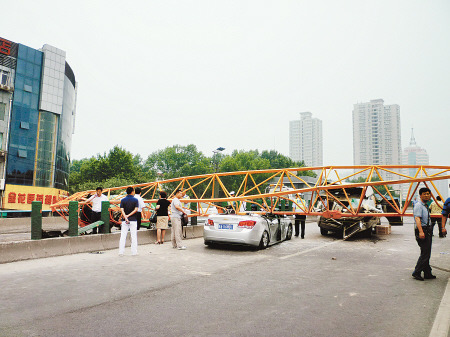 A report that got Bloomberg temporarily blocked in China: “As Xi [Jinping] climbed the Communist Party ranks, his extended family expanded their business interests to include minerals, real estate and mobile-phone equipment, according to public documents compiled by Bloomberg. // Those interests include investments in companies with total assets of $376 million; an 18 percent indirect stake in a rare- earths company with $1.73 billion in assets; and a $20.2 million holding in a publicly traded technology company. The figures don’t account for liabilities and thus don’t reflect the family’s net worth. // No assets were traced to Xi, who turns 59 this month; his wife Peng Liyuan, 49, a famous People’s Liberation Army singer; or their daughter, the documents show. There is no indication Xi intervened to advance his relatives’ business transactions, or of any wrongdoing by Xi or his extended family.” [Bloomberg]

Run by the excellent Philip Pan and former Caixin reporter Cao Haili: “The New York Times is introducing a Chinese-language Web site, part of a continuing effort to expand its reach to international readers. // The site, which is called cn.nytimes.com and went live Thursday morning China time, is intended to draw readers from the country’s growing middle class, what The Times in its news release called ‘educated, affluent, global citizens.’ // The site will feature about 30 articles a day on national, foreign and arts topics, as well as editorials. Joseph Kahn, the paper’s foreign editor, said that about two-thirds of the content would be translated from Times articles and one-third would be written by Chinese editors and local freelance journalists.” [Media Decoder, NY Times]

All that studying for gaokao, and then? “As the debate heats up, a 2006 survey about China’s higher education has resurfaced as a topic on China’s Twitter-like microblogs. The China Youth Daily-QQ.com survey says that among the 8,777 web users who answered the online survey, 34.7% said they “regret” that they went to college, and 51.5% said they ‘didn’t learn anything useful’ in college. // …A number of microblog users complained that they are facing unfair competition for jobs from the children of the powerful and wealthy. One said, ‘Competing to win a job has now become competing to show who has a more privileged daddy.’ A tougher job market has raised the volume of such grievances.” [Wall Street Journal]

Uh, yeah… want. “A software program that can recover deleted posts from the mainland microblogging site Sina Weibo has been developed at the University of Hong Kong. // Mainland censors monitor the Chinese version of Twitter for politically sensitive posts and delete them but a university pilot project, WeiboScope, allows researchers to recover and analyse the deleted postings. After beginning work on the project early last year, researchers are starting to share their findings.” [South China Morning Post]

Taiwan dude going around the world, just not China. “A Taiwanese man is about to embark on a six-month world tour during which he’ll repeatedly transform himself into a human flag, reports ITN. // …According to the International Business Times, the cyclist says he plans to spread the word about Taiwan as he visits countries around the world. China is not on his list, however.” [Huffington Post]

Zombies. Gotcha. “An intoxicated bus driver has been detained after he gnawed on a female driver’s face after blocking her car on a road in Wenzhou City of Zhejiang Province, local media reported yesterday.” [Shanghai Daily]

Above and beyond their duties. Must’ve been a slow day in law enforcement? “A Russian man named Sergei travelled to Ningbo and his passport was throw away by a hotel cleaning staff as a litter, After learning about the situation, the police went to the waste transfer station and after turning five tons of garbage upside down, the police found his passport, When Sergei was on his way to the consulate in Shanghai to apply for another passport, After hearing that the police found his passport in garbage,he just couldn’t believe it.” [China Whisper]

“Articles written in English, translated into Chinese by humans, and translated back into English by Google (by @zseward).” [The English Chinese New York Times]

Great stories linked to by Danwei: This is the 1510 Digest, a weekly roundup of recent essays and articles published in Chinese on My1510.cn, with links to translations on the Marco Polo Project.