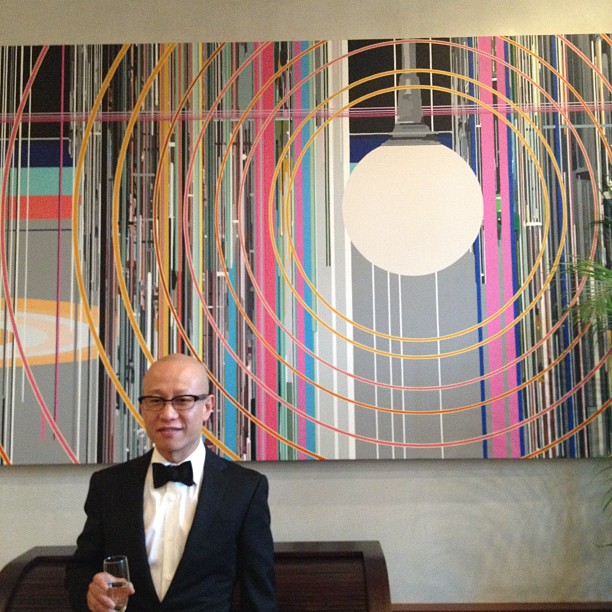 Picture via Philip Tinari, captioned: “Liu Wei in front of his painting at waitanyuan, hung upside down for last 3 years.”

Dazefeast is tomorrow starting at 4 pm at 2 Kolegas, for those in Beijing. Unrelated: the most interesting things happen between Wednesday and Friday, as we’re about to show you in today’s links.

Americans in China (hey, that’s me!). “It used to be that the American expats in China were the big shots. They had the money, the status, the know-how. But much of that has changed. What’s it like to be an American living in China now? What does life in China offer Americans that they can’t get here?” [This American Life]

A collection of countryside slogans encouraging the one-child policy. “Pull it out! Abort it! Induce it! Anything but to give birth to it! … We’d rather allow blood to flow like a river than to allow an excess child to be born.” [Offbeat China]

Street vendors are now selling sex mushrooms. “One very enterprising street cleaner who makes additional income by hawking things off the street is now passing off artificial vajayjays as the long lost magic mushroom, and selling them for as much as 18,000RMB (US$2,800)! // He even has a highly authoritative sales pitch playing off his laptop on loop — the Xi’an TV news report which has since gone viral all over the world. // When one ‘prospective buyer’ questions the man about the veracity of the report, he answers matter-of-factly, ‘It’s on the news. How can it be fake?’” [Shanghaiist]

Is the SCMP still relevant? (Not as long as it’s behind a paywall, in my opinion.) “But this issue masks a much larger and more consequential one: the SCMP’s relevance.  What happened this week was merely years’ worth of tension boiling over.  The general consensus in Hong Kong is the SCMP has been fading as a relevant source of information since its halcyon days under the British, made worse by ownership changes and management shuffles that have further destabilized the paper and diminished morale.” [Zhongnanhai]

Liao Yiwu wins German Peace Prize. “Though his works tell of atrocities and suffering, both his own and that of his countrymen, his skilled style draws in readers from other cultures and is not without humor, Herbert Wiesner, secretary general of Germany’s PEN Center for persecuted writers, told DW.” [DW]

China owns moon. It’s gonna happen. “For all the talk of the Obama administration’s ‘pivot’ to Asia, what if the flash point for U.S.-China conflict in the 21st century isn’t the energy-rich atolls of the South China Sea or the minefields of the Taiwan Strait, but a bit farther away — say, about 200,000 miles from Earth?” [Foreign Policy]

A gaokao rant, overdue. “A 12-minute video of television host Zhong Shan (@我是钟山 ) delivering a passionate rant against the gao kao has gone viral on Weibo, China’s Twitter. (Readers can see it in all its glory here.)” [Tea Leaf Nation]

Chinese climber beaten by Tibetan guides on Mount Everest. According to eyewitness: “I did see the permitless chap being ushered down the hill.  The Tibetan rope fixers were sent up to get him. I saw them bringing him down the ropes from the North Col to [advanced base camp]. It was disgraceful. They literally kicked him down the ropes. It was a disgusting example of a pack of bullies egging each other on and literally beating him down the hill. It was absolutely unnecessary as he was offering no resistance and was scared out of his mind.  The Tibetans should, and could, have just escorted him down the hill and let the authorities deal with him.” [Outside]

Two Nigerians rob six taxi drivers at knifepoint in five days. “Sina is reporting there were six robberies last week targeting taxi drivers in Foshan’s Nanhai District, all of which were alleged to have been committed by Nigerian expatriates. The robberies totaled RMB11,000 in value, according to the Guangzhou Daily.  So far one of the suspects, a 33-year old Nigerian man, has been arrested.” [The Nanfang]

Conviviality on the Beijing subway interlude, via 647 Miles Apart: