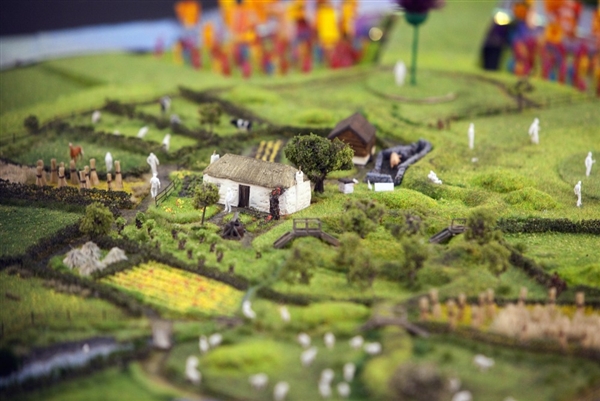 The jokes (and groans) are out today after Danny Boyle, artistic director of this summer’s Olympics opening ceremony, unveiled his vision, “inspired by Shakespeare’s The Tempest,” the Guardian tells us, and “ideas from Mary Shelley’s novel Frankenstein,” according to the Huffington Post. With a fair amount of Jane Austen’s countryside, I might add. Reports the Telegraph:

Boyle’s quirky sense of humour is evident in the ideas for the ceremony and the pastoral scene, which include 70 sheep, 12 horses, 10 chickens, three sheep dogs, real grass and a plough. There are also clouds with fake rain just in case the night is clear and a game of cricket.

And remember how Beijing set up cannons to potentially disperse rain clouds? Boyle is taking a slightly… diametrically opposite approach.

“If it doesn’t rain, we have created our own,” Boyle said as he revealed the latest details of the £27m ceremony, pointing to the four huge clouds suspended on wires overhanging a model set of the Olympic stadium.

Gawker’s Caity Weaver writes, “The World Regrets Letting England Plan a Party as Olympic Opening Ceremony Details Are Revealed.” Deadspin’s Erik Malinowski wrly notes, “For $42 Million, The London Olympics Opening Ceremony Will Resemble The English Countryside.” MSNBC stifles laughter as it reports, “Cows and sheep to star in London Olympic Games opening ceremony.” Those are just the headlines, by the way. And yes, they might be biased because they’re American, but it’s hard to not be a little snarky when the ceremony is being described as “Green and Pleasant Land,” right?

The Telegraph has a video of Boyle presenting his vision, in which he says:

When you sit down and start to think about what is it about the show, what is it about the ceremony that you want to actually do, you sit down two years ago with a blank sheet of paper and you begin with a [indecipherable to these American ears] philosophy, which I think is probably common to a lot of these shows, which is you think what were we, where do we come from, what’s the heritage, the historical, what are we now, and where are we going? And on that journey what are the values that we hold true and we want to hold up as being valuable, really?

Contrast — however unfairly — to Beijing’s vision four years ago (which I watched from Ditan Park):

The Guardian, seeing an opportunity here, has asked its readers to “Email your photoshopped masterpieces to gallery@guardian.co.uk by midday on Wednesday 13 June, complete with a caption. We will share the best we receive in a gallery – and the top three will also win a prize.”

Frankenstein, The Tempest, and a pastoral scene, with cows and cricket (the sport). We can’t wait to see the results.

6 Responses to “London’s Olympics Opening Ceremony Will Look Nothing Like Beijing’s, Anyone’s”