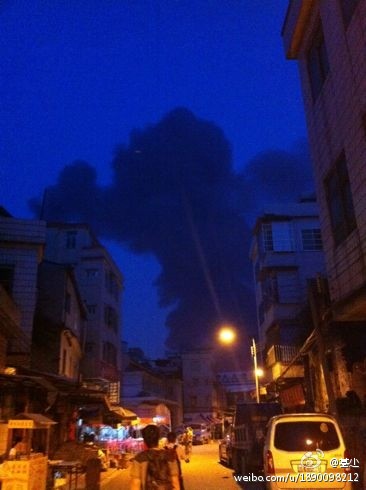 Now we know what kind of explosion results when a tanker with 40 tons of gasoline crashes. Early Friday morning in Guangzhou, thousands were abruptly woken when an oil tanker truck collided with another vehicle, setting off a tremendous explosion and fire that reportedly covered 2,000-square meters. The Associated Press reported on this about an hour ago, and interviewed a Guangzhou resident who lives 2 kilometers from the crash:

“There often are overloaded container trucks passing by, so I thought maybe a container fell off a truck and did not think too much about it,” Xu told The Associated Press in an online interview.

“But when the second bang went off, the force of the explosion was so strong it made me bounce a little on my bed,” said the man who works in a telecommunications company.

Apparently the 20 who died (and at least 14 27 injured) were mostly migrant workers in the area. After the jump, some video of the aftermath, namely billowing smoke.

Youku video of the above here.