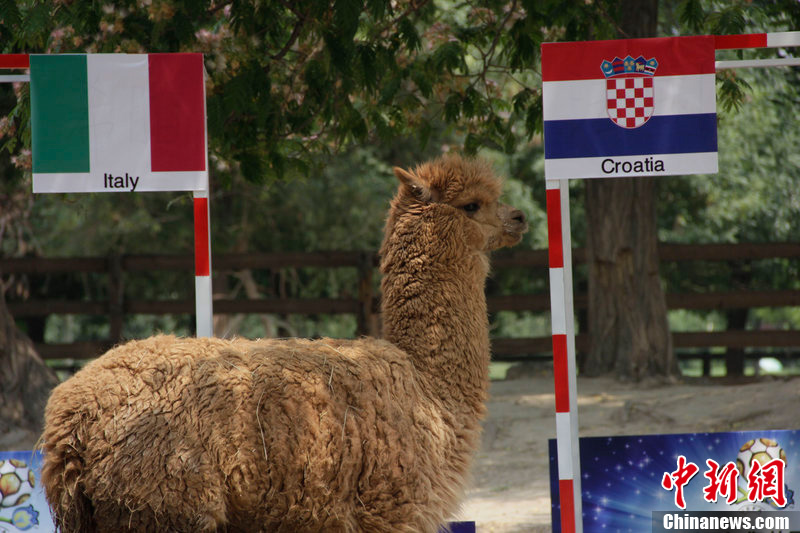 There’s a new Paul the Octupus in town. In China. And he’s a llama – no, not that kind. For some reason, and despite having fuck-all to do with Euro 2012, Tianjin Zoo is attempting to lure thrill-seekers to its no-doubt already white-knuckle zoological experience with a llama that can predict the actual results, thus saving many the effort of actually watching the game.

The Chilean alpaca has already shown a more or less complete disinterest in the England-France match (which resulted in a draw) and allegedly snubbed the Dutch in favour of shambling over to a post marked with the German flag (the Teuton team won 2-1). And in the accompanying photograph, the llama – which remains inexplicably nameless – once again parked its furry hide betwixt Italy and Croatia, signaling another draw (1-1 was the final). It doesn’t get any better than this.

The zoo itself is described as being among the “Best Ten” zoos – named by the National Construction Ministry! – on its website, and contains “an open-style herbivore area where people and animals got along with harmoniously, naturally and closely.” It is, in short, “a place make the tourists so enchanted as to forget to return.” Yes – this zoo is so good that you’ll never wish to lay eyes on it again. Will Mr Anonymous Llama change all that? Stay tuned.