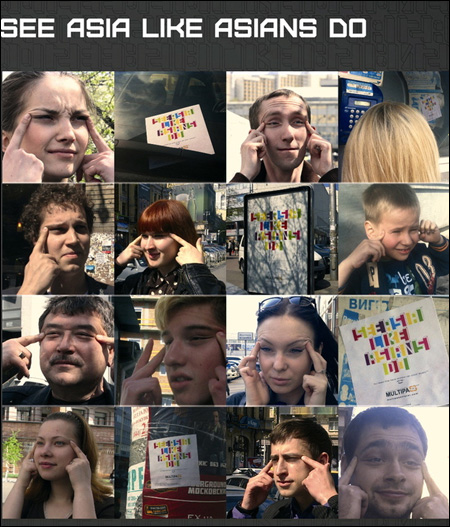 Multipass is company that promotes travel to Asia, which means there’s a chance I’ll be seeing one of the above cretins here in Beijing. Oh, joy.

Lots of folks are calling this ad, called “See Asia Like Asians Do,” racist. Eh, I say. They have different standards for racism in Eastern Europe, as this year’s Euro in Ukraine and Poland has taught us, so shouldn’t we judge Multipass by its own standards?

I don’t know. But I do know that on the site Ads of the World, 99 people have voted on this, and it’s currently doing a 1.9 out of 10. So… racist? Probably, but what does that matter? It’s stupid, plain and simple. And that should be reason enough for them to fail miserably. 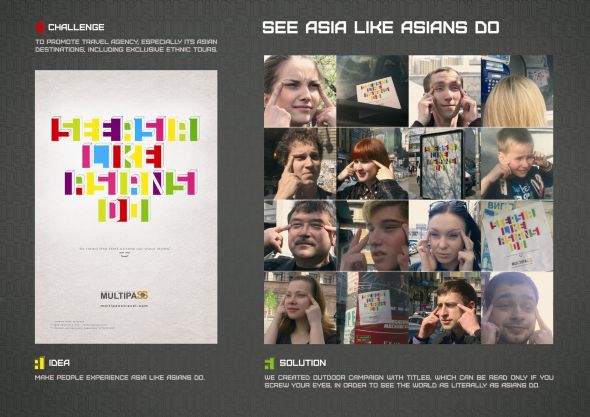 By the way, the fine print reads:

SOLUTION: We created outdoor campaign with titles, which can be read only if you screw your eyes in order to see the world as literally as Asians do.

Wow. That is really stupid. I’m “screwing my eyes,” and it doesn’t work! Maybe it’s because I have slanty chink eyes? Caucasian readers out there… help!