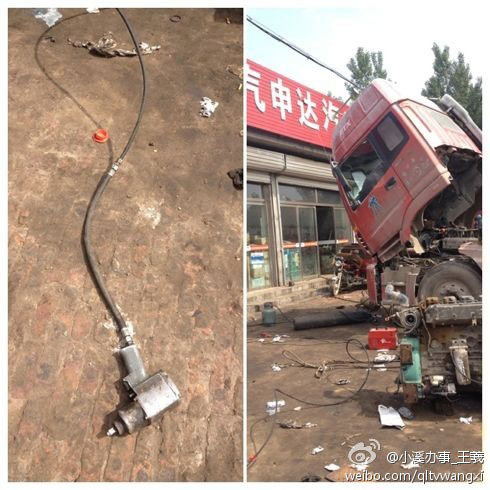 Two months ago, there was a post in this space called Chinese People With Unfortunate Anus Problems: A Compendium, wherein I linked to a story about a chef who died after his pals punked him by shoving a live eel up his anus. (“Medics said the eel had devoured his bowels.”) “Bad prank, or worst prank in the history of the universe?” I wondered. If that was the worst, it now has company. Consider this, via Shanghaiist:

Top story on Sina Weibo today: A 13-year-old boy is now under intensive care after two colleagues at the auto workshop he was working at forcibly inserted a pump nozzle into his anus, and pumped him up like a car tyre.

Du Chuanwang woke up from an 8-day coma three days ago, and is now being rushed from Dezhou, Shandong province to Beijing, on an ambulance, where he will be placed under intensive care at the Beijing Bayi Children’s Hospital.

The details are grisly. Read on if you dare.

Doctors say that had the two workers just stepped up the pressure a bit, the boy could have exploded.

Aside from 28 punctures in the boy’s intestines, he is also now suffering from multiple organ failure. When he arrived at the hospital, his intestines were hanging outside his body.

The boy apparently lost his mother at a young age, and was working at the auto shop to supplement his family’s income. Let’s repeat: the boy is 13.

chinaSMACK has this translation from Sina Weibo:

@小溪办事_王羲: Just went to the hospital to visit Du Chuanwang. This 13-year-old mother-less child had gone to work in an auto repair shop to help take care of his family ended up having a high pressure pneumatic air pump gun stuck into his anus by two workers who then pumped air into him! The child’s intestines have essentially exploded, his scrotum now as large as a watermelon! His internal organs have all been squeezed together by the air pumped into his body, so horrific! The thoughtful child only has one wish, to bring his beloved younger brother there so he can see him. Please help this child. He is in the Xiajin People’s Hospital Intensive Care Unit.

Feel free to scroll through more comments, but be warned that every comment is liable to provide another detail, which just makes this story all that worse.

The two workers who did this — who claim they pumped the boy with a tire’s worth of air as a “joke” – have been detained by Shandong authorities. It’ll just be a matter of time before the online flesh engine exposes their names, and we’ll then see what kind of “jokes” are directed their way. 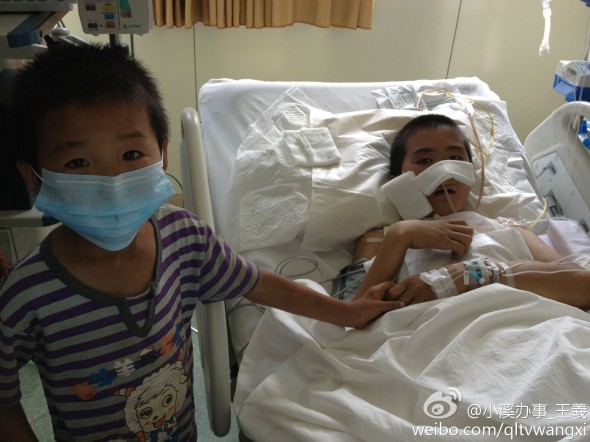 A journalist has publicized the boy’s father’s bank account and asked people to send donations:

Update, 2:12 am: Newscast uploaded to Youku seven hours ago, 39,000 views (the more the better; we’re told the hospital fees are 20,000 yuan per day, which means the family is absolutely relying on the goodwill of the public).

UPDATE, 11:48 pm: A glimmer of hope for humanity’s redemption out of his atrocity: thanks to an incredible outpouring of public support, the child has been moved to a Beijing hospital. (Traffic cops directed traffic for the express purpose of ensuring the boy’s ambulance got where it needed to go as quickly as possible.) Du Chuanwang’s recovery still isn’t assured, but his chances have improved dramatically.

One Response to “A Story That Hurts To Read: “The Child’s Intestines Have Essentially Exploded, His Scrotum Now As Large As A Watermelon!” [UPDATE]”