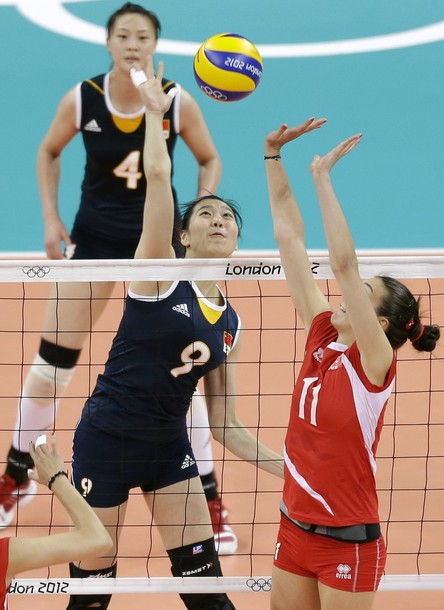 The excitement continues. Here are some of the more noteworthy stories from the Olympics.

The Chinese women’s basketball team improved to 2-0 today with its 83-58 blowout of Croatia, and games are only expected to get easier (with the exception of the final game vs. the US). This team is my favorite of these Olympics so far. I’ll get myself to make a gif of Chen Nan coming off pick-and-rolls soon.

BBC host implies 16-year-old Chinese swimmer was on artificial performance enhancers because she was awesome. “When Clare Balding witnessed Ye Shiwen being crowned the Olympic champion with her 4 minutes 28 seconds and 43 new world record, she hesitated a little at first, then immediately turned to BBC guest commentator former British swimmer Mark Foster, ‘How many question will there be, Mark, about somebody who can suddenly swim so much faster than she has ever swum before?’ Mark obviously heard Clare’s undertone, but he firmly defended Ye Shiwen’s reputation, ‘It was a five-second best time and it was the way she did it as well. Bearing in mind she is 16 years of age, and when you are young you do some big best times… it can be done.’” [Sina via China Hush]

While Wang Mingjuan won China’s first weightlifting gold in the women’s 48-kilogram division, the more dramatic competition was over on the men’s side, where double world champion Wu Jiangbiao was competing in the clean and jerk. We’ll let the Associated Press describe what happened:

North Korea’s Om Yun Chol, all of 5 feet and 123 pounds, won a gold medal by confidently lifting an Olympic-record 370 pounds in the clean and jerk Sunday at the London Games.

That was more than three times his body weight, something only a handful of others have ever done.

How unlikely was the upset victory?

Om was in the “B” group with lower-ranked competitors and lifted weights of 160 and 165 kilograms on his first two attempts early in the day. He got the crowd roaring when it was announced he would go for 168 kilograms — the Olympic record.

As is customary, Om thanked the late Dear Leader:

“How can any man possibly lift 168kg?” Om was quoted as saying by the internal Olympic News Service. “I believe the great Kim Jong Il looked over me.”

I disagree with Ai Weiwei’s assessment of Beijing’s opening ceremony, but here’s what he had to say about London’s: “Brilliant. It was very, very well done. This was about Great Britain; it didn’t pretend it was trying to have global appeal. Because Great Britain has self-confidence, it doesn’t need a monumental Olympics. But for China that was the only imaginable kind of international event. Beijing’s Olympics were very grand – they were trying to throw a party for the world, but the hosts didn’t enjoy it. The government didn’t care about people’s feelings because it was trying to create an image.” [Ai Weiwei, The Guardian]

Empty seats filled by public servants. “More than 50 soldiers took seats at the North Greenwich Arena on Sunday morning when they were left empty by the ‘Olympic family.’ Some of the troops, working at the Olympics to provide security, said they were scheduled to start shifts but instead were offered courtside seats at the basketball arena to watch the USA v France. // Despite featuring superstars including Kobe Bryant and being close to a sellout with the public, there were around 40 empty seats in the arena reserved for Olympic and sporting officials. ‘We’re seat fillers,’ said one of 15 soldiers drafted on Sunday afternoon. ‘They asked who likes basketball and we put our hands up.’” [Guardian]

The Hater’s Guide to the Olympics. [Drew Magary, Deadspin]

Asian and Pacific Islanders at the Olympics: a list. [Asian Weekly]