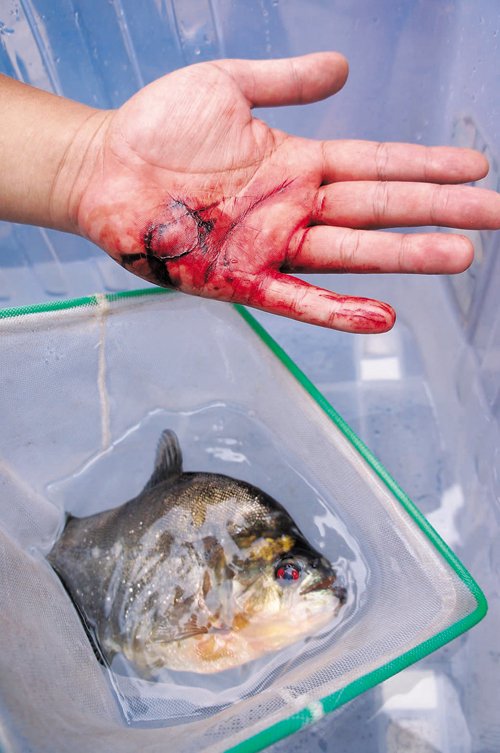 If you’re planning a holiday to Guangxi this summer – home to to what’s considered China’s most picturesque landscape – here’s a heads-up before you go swimming.

There are man-eating piranhas in the river!

According to the local fishery’s department, the carnivorous South American fish is commonly found in the rivers of the province. Like New York’s apocryphal sewer gators, the fish were originally bought as pets before ending up in the ecosystem after (presumably) being flushed away or chucked in the river… where they multiplied.

Yesterday afternoon, one Mr Zhang was washing his dog in the Liu River, Liuzhou, when he was attacked by three of the buggers. Zhang managed to shake one off on the riverbank, and was taken aback to realize it had chewed off a good-sized chunk of palm (Zhang’s friend later got the same treatment to his thumb after “playing” with one of the captured beasts). Armed with a corpse and a plan, Zhang hit the Internet and called local reporters, who soon learned that authorities were already aware of the problem – and completely unable to do jack about it.

Officials blame “unscrupulous people” who have deliberately introduced the Amazonian fish to the local waters. With a similar climate, but no natural predators, the piranhas have apparently decimated the local fish population and unbalanced the ecology. Law enforcement and regulation in this area is typically weak – there are, in fact, no clear laws on the trade of exotic “ornamental” fish.

China is grappling with about 120 invasive species, 50% of which were “artificially introduced” (flooding is one of the other main causes). The Liu River is one of the city’s main attractions, and swimming is a major tradition there. The urbanization of the region has inevitably threatened the pastime, however, and it would be really unfortunate this summer if that simple, if polluted, pleasure was further blighted.

I mean, what if the fish got into contact with some kind of man-made, toxic chemical – like, I don’t know, a gigantic cadmium spill — and mutated? That really would be only a B-movie scenario, right? 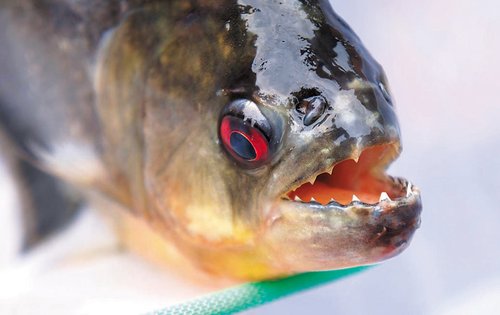 As a postscript, please, folks, remember: if you do absolutely, positively have to go swimming, be sure to wear protection.