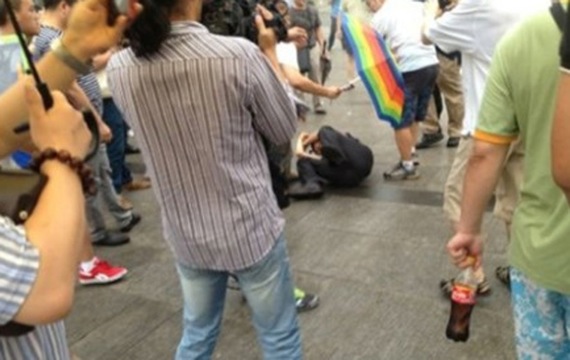 What happens when you’re a socialist Chinese blowhard and you get your ass handed to you by a girl after challenging her to fisticuffs in a Beijing park?

You tell everyone you won, of course.

In one of those weird “This is China” moments, while the rest of Beijing came to a grinding halt over some light rain at 1 pm on Friday, a whole bunch of Web users and bloggers – all of whom were carrying at least four or five umbrellas apiece – convened at the south gate of Chaoyang Park for a Grumble in Das Jungle.

In the red corner, Wu Danhong. In the blue, Zhou Yan. In the crowd: non-particpant Ai Weiwei!

Let’s start with the basics here.

First up, who the Karl Marx is Wu Danhong?

Here’s a quick primer (skip the next four grafs if you’re a China Hand or you just want to read about the fight): Wu is an assistant professor at the China University of Political Science and Law and, as microblogger Wu Fa Tian – if you believe some – chief bloviater for the 50 Cent Party (the dudes who shill for the government online for, so it is said, five mao a post; a woefully underpaid profession in this economy). Wu is what’s known in China, rather oddly, as a “public intellectual” (公共知识分子) – a stilted and frankly feudal phrase that really just means he’s an accredited voice in the ongoing mass debate about where China’s headed.

What makes Wu – and others, like Sima Nan and Fang Jinggang, who are fiercely (quaintly) pro-Party – is that he routinely gets drizzled on by the CCP, just like every other commoner. While Wu’s the kind of far-reaching seer who sees nothing but a routine accident when a village activist like Qian Yunhui suddenly get crushed by a truck, it seems the Party is a cruel lover and thinks nothing of slapping its own hos some  – ’cos, you know, dem sluts love it. They do.

Last August, according to Global Times, Wu “suddenly found himself unable to post or comment on Weibo. He complained to the service manager, and he was told that it is probably because his posts ‘dealt too much with current politics.’ A day later, he was shocked to find out the number of his Weibo fans was rapidly declining and he was ‘forbidden’ to follow others.”

As a senior academic in political science and law, Wu promptly called out the administrators of Sina Weibo for being hysterics who stifle intellectual debate. Wait, hang on; no. He quoted scholar Hu Shi: “Forgiveness is more important than freedom.” (How’s that for a gaokao essay question?)

Wu also has a rich history of making a public ass of himself. Among the fuck-ups he will have to explain away to the Eternal Recorder on his demise are: 1) running to the cops after musician Jian Cui (not to be confused with Cui Jian) threatened to bust his chops; Wu had denounced Ai Weiwei’s appeal for public donations to pay off his rigged 15-million yuan tax bill as “illegal fundraising,” and suggested Ai “may be in cahoots with an unseen international conspiracy”; 2) failing to show up to a scrap suggested by talking head Yao Bo; after agreeing to meet at a gas station, Wu’s representatives at the Public Security Bureau showed up instead; 3) starting up an online group devoted to quashing unsubstantiated rumors.

Once again, let’s remind ourselves: Wu is a public academic and alleged legal expert; instead of arguing for a free press, which amongst other things would clear up this nagging “rumors” issue, Wu and his gang instead devoted themselves to “selectively busting rumors” and “only busting popular rumors, but not official ones” in order to “correct the guidance of public opinion,” according to the respected Southern Metropolis newspaper.

In other words, Wu Danhong is an academic amoeba.

(For more on Wu, do check out that Global Times piece by the reliable Lin Meilian, which neatly summarizes the case for aurally gang-banging Wu Danhong in an unsafe way.)

Zhou Yan, whose Weibo handle is This is Yanyun, is a liberal-leaning Chinese journalist who has been in the public eye recently for her coverage of the Shifang protests in Sichuan.

Shit kicked off earlier this week with some textbook Weibo slanging. Wu ramped things up by basically calling Zhou a “bitch” (母知, a wicked-unfunny pun on 公知, netizen shorthand for 公共知识分子, “public intellectual,” the diminutive term mentioned earlier). This rankled Zhou, who suggested they meet behind the bike sheds after school and settle their differences (by “bike sheds” I mean, of course, “Chaoyang Park South Gate,” and by “after school” I mean Friday afternoon).

The fight was billed by Wu himself as “an opportunity to spread the law. We’ll teach the lowlifes: the law-abiding people will no longer be lonely, and we’ll strike fear into the hearts of those who break the law.”

Of course – because nothing says “rule of law” like fighting a girl.

Except it didn’t really go that way. Although Wu is said to have turned up with a bunch of heavies, he still somehow got his ass handed to him by a girl who, even by Chinese standards, is somewhat shrimp-like in stature.

The censors on Youku do not like this video.

You can’t really see anything because, despite the fact that there’s only a mizzle of rain, everybody is carrying an umbrella and a camera phone. Let’s go to the dialogue:

Zhou: There are lots of people who are cursing you…

Wu: I’m not talking about anyone else. It’s you who’s cursing me.

[Zhou moves in and scuffles slightly]

Wu, garbled: If you want to challenge me, you need to have less people on your side

[Sound of mild smack. Kerfuffle. Gibberish from the crowd. Someone cries "Stop!" (think of the children), "Get up," and the onlooker classic, "Forget it. Let it go."]

[Wu is now inexplicably downed. He gets up.]

Crowd: Now you know what China’s opinion of you is!

Wu: Let’s just have a debate with her today.

Wu: So many people beating me up. Me, one person. I’m here today to debate.

Zhou: Who the hell is here to debate with you?

It goes on like this for a while. It’s really not much of a fight, and quite how Wu ends up cowering on the ground is beyond us. Zhou has been supposedly detained by the police and may have to spend the next five days staring at the ceiling in the Maizidian police station (via LeTV.com PR director Ren Guanjun [the post has since been removed]). Upping the amusement factor were onlookers: Wuyue Sanren (a Weibo public figure) and Ai Weiwei, who has personal form with Wu and just so happened to be taking a midday stroll in the rain past the park. Ai merely observed and didn’t lay a pudgy finger on anyone, despite what Wu is now claiming.

(Ai had this to say about that on Twitter: “Regarding Sima Nam, Wu Fatian, Hu Xijin and the likes, it’s not so much if one should hit or not, but rather that by touching such a dirty, as well as evil, idiot one would really dirty one’s hands.”)

Here’s Ai Weiwei being cheered at the scene:

What’s interesting is the way this is now being now reported and presented; once again, the disconnect between the official media and the public is vast.

Let’s hear from Wu (Zhou is obviously unavailable for tweeting). He says that he “won” – in a moral sense – and took a dive for the Party in order somehow to “prove” that his rivals are unruly thugs who can’t be trusted with a knuckleduster, let alone political reform.

His camp says that the weakling professor turned up expecting “a public lecture about the law” – you know, one of those out-in-the-open freewheeling debates you see all the goddamn time in China. And while it’s true that Zhou’s supporters definitely outweighed the professor’s, pitching up at a pre-arranged meet with an online rival outside a park gate and expecting merely a healthy chat suggests either a third-rate intellect or a disingenuous streak. Or both.

Wu is for some reason also claiming that he is being censored – “Why is Sina screening my tweets this afternoon? Why are they only allowing the other side’s voice to be heard?!” he asks without any apparent irony.

If it’s censorship he wants, he need only turn to this editorial, “Brawl shames all Weibo intellectuals,” which steamrollered off Global Times’s Crank-o-Matic this morning. You intellectuals out there, wherever you were Friday, blissfully going about your lawful business – you got shamed. Shamed!

The editorial goes on to state: “There was no winner in this farce.” You hear that, Wu? You didn’t win, morally or otherwise.

After much prevaricating, GT finally blurts out its main beef: that all these young activists protesting at places such as Shifang are ro be viewed fearfully – by cadres – as quasi-Red Guards, “post-90s generation” edition. This same insult is also regularly flung at 50 Cent Party members like Wu Danhong – that they’re thoughtless stooges “accusing opponents of false crimes and forcing people to take sides” (GT again). And of course, Wen Jiabao said the same of Bo Xilai.

Saying “your mother was a Leftist” and evoking terrors of the Cultural Revolution is fast becoming China’s equivalent of Godwin’s Law: sooner or later, in any debate over China’s future, the chances of one person accusing the other of some form of regressive Maoism is – one. It’s a sad prospect. As a respected Chinese public intellectual just said: “There are no winners in this farce.”

Thanks to Valentina Luo and Brendan O’Kane for translation and commentary, and H/T to James Palmer, another ‘public intellectual’ who completely missed this fight despite living just a stone’s throw away. He was busy fighting. Goblins.