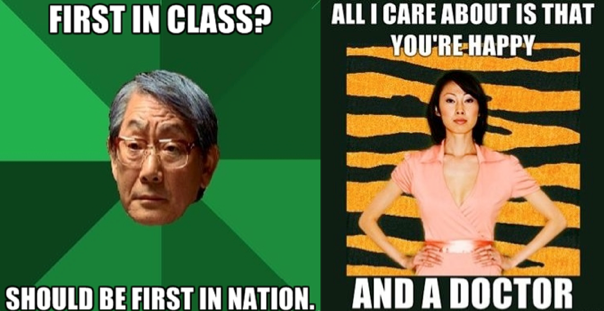 We’ll have to wait until July before the results of the gaokao – national university entrance exams – are announced. When they are, state media’s response will be as predictable and reflexive as British media et alia sticking an attractive blonde celebrating her A-levels on the front page (and pages 2,3,5,8 and 9).

The top scorers become instant overnight celebrities. No craziness is spared, with “posters and banners on the school gates and… news conferences” (China Daily), as well as interviews, even product placements, propelling these gawky youths into the public spotlight.

Schools compete to attract these zhuangyuan, as they are known, and even PKU and Tsinghua offer scholarships as high as 50,000 yuan to give these nebs a chance to reach for the starry, starry sky.

And then we never hear from them again.

New research suggests that all the IV drips and oxygen masks really aren’t worth it: real employers don’t care much for college qualifications, setting store instead by things such as work experience, “personal aptitudes, such as the ability to innovate and adapt to change,” personality and foreign-language skills. One tech start-up honcho says he gets “exhaustive resumes running as long as six pages,” but “only about 10% of the applicants he sees are properly qualified.”

Yet even as its efficacy declines, the gaokao now costs 80,000 times more than it did 30 years ago to sit, and parents show little sign of letting up on their kids to pass it. So what are the questions that are deemed so life-changing?

Here’s a round-up of this year’s essay questions, courtesy of Valentina Luo – along with how we’d have answered them:

I was helping my family with some farming work during a weekend and the field was very muddy due to the rains. I was carrying a lot of equipment on my shoulders and was afraid of falling over. My legs were shaking. My mom spotted it and told me to take off my shirt and shoes and try again. It was much easier. Eventually I brought the stuff to mom and she said, “It’s not that you can’t do it – you were too worried about getting your shirt dirty. By taking them off, you got rid of the unnecessary concerns.”

A painter was asked to repaint a boat; he also fixed a hole on the boat although he wasn’t asked to. Several days later, the owner sent a large sum of money to the painter. “I was paid already,” the painter said. “This is for fixing the hole,” the owner of the boat said. “It was just convenient,” the painter replied. “When my children went out to sail, I thought they weren’t going to come back. But now they did. I should thank you for it.”

[BJC: When your plan to kill your kids goes awry, cover your tracks. Pay the man.]

Old Ji is a railway security man and he works on a mountain. His job is to examine the railways to prevent the fallen stones and trees from affecting the trains. He salutes every time the train passes, and the train will honk its horn in return. What do these scenes remind of you?

[BJC: The good old days. The thing about Mao was, he always made the trains run on time.]

Two fish are swimming in a river. The older one asks, “How’s the water?” The younger one says, “I don’t know if it’s clean or cloudy.”

For the little shining in their hearts, people often let them go because they think that shines are really individual. But then they often recognise those shines in masters’ works.

[BJC: Kid's got the Shining? Better listen to what he says.]

A true story from a meat-processing factory: A worker was in the cold store when the door suddenly closed. He was stuck in there, struggling, for five hours. He was dying. Suddenly, the door opened, it was the security guard of the factory. Someone asked the security guy afterwards what made him do so, since it’s not part of his daily job. “I’ve worked here for 35 years, and he’s the only guy that says ‘good morning’ and ‘see you tomorrow’ every day to me, of all the hundreds of workers here. He said good morning to me today, but I never heard the other half.”

[BJC: Stop being an asshole to the security guard in your building.]

An English historian once said, if he could choose when and where he’d like to be born, he’d choose Xinjiang, China during the 1st Century, because Buddhism, Indian, Persian, Greek and Chinese culture came across each other then and there. Mr.s Curie wrote to her niece that, “You told me you wished to live in a century ago; another girl said she’d definitely prefer in the future. I think whatever age we live in, there’s a way to live meaningfully and interestingly.”

[BJC: Hands up: which of you wishes you could have been born a Uighur or Tibetan today?]

A quote from Sun Yat-sen:

“My generation should take the reform and development of China as our responsibility. This faith should last till the end of the world. We shouldn’t be frustrated by failures or overcome by the difficulties. We should focus and step forward so as to catch up with the global progressing trend. Goodness shall accumulate and evilness shall eliminate and one day, we shall succeed.”

[BJC: Tread carefully on this one... could get awkward.]

Various communications methods are being developed: email, SMS, etc. Do you think the letter is replaceable?

[BJC: This question presumably posted by letter from 1997.]

[BJC: This question sponsored by Laoshan.]

For several months, a sign was left on a ladder at a construction spot: “Notice: Ladder.” One day, a guy came and changed it to “Notice: put this somewhere else when it’s not in use.”

[BJC: Whoever can turn this into a pithy slogan for Li Ning gets a job in their marketing department.]

What constitutes a good answer is anyone’s guess. Although a few seem to ask for logic and thought, there seems to be some kind of “right” answer required – a magical alchemy of rote learning, garbled rhetoric and Party-line blather. Or a Global Times editorial.

If you have any ideas for what a correct answer should look like, leave them in the comments section – 10 marks each.