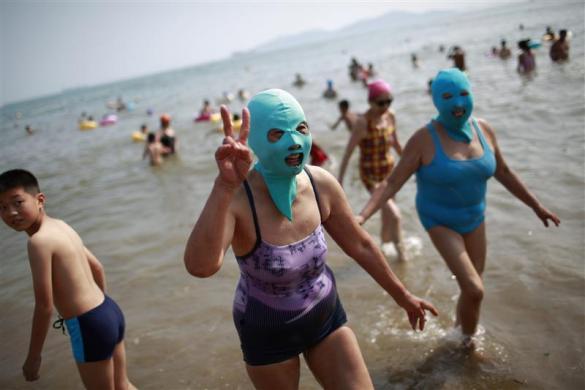 Qingdao, Shandong province, July 6, 2012. The mask, which was invented by a woman about seven years ago, is used to block the sun's rays. The mask is under mass production and is on sale at local swimwear stores. REUTERS/Aly Song

Image from Reuters, via The Atlantic Wire

Friday was International Kissing Day, and on Saturday FC Guoan won 1-0 at home vs. Guangzhou Evergrande. It all makes sense: here are links.

While netizens “debate” the forced abortion in Shaanxi, another case of forced abortion: “Another victim of a forced abortion during late-term pregnancy – conducted because of the mainland’s one-child policy – is seeking redress through the courts. // Beijing lawyer Xu Can said yesterday he was representing Wu Liangjie, 30, from Daji town in Fujian province , whose wife, Pan Chunyan, also 30, was forcibly given an injection in April that killed her unborn son. // Xu also said a letter would be sent soon to the Xianyou county government, which administers Daji town, demanding that officials investigate the criminal acts of those involved in the abortion. He also said the letter would demand compensation for Wu’s family for damages and mental distress.” [South China Morning Post]

A modern Chinese tragedy. “To save a family of three from drowning, 27-year-old Deng Jinjie jumped into the river without regard for personal danger. However, he ran out of strength and was soon swallowed by the rapid river and drowned. Just as Deng Jinjie’s life was in danger and whether he was alive or dead was unknown, the rescued family of three chose to leave. A witness says: When the crowd stopped the family of three from leaving, the woman said ‘none of my damn business’ before driving away. Sanxiang City News.” [chinaSMACK]

Old media vs. new, and how this applies to China. “And over the last 12 years, the newspaper industry in the US has died a painful death. Advertising revenue peaked at $60 billion in 2000, but it’s only $20 billion today. NYT stock down from $50 to $7 a share. // …In the US, media is often called the ‘fourth estate’ after the the executive, legislative, and judicial branches of government, because of its role as a watchdog. It’s important to note that the paramount objective of US media organizations is to make money, not to serve as a watchdog. But it so happens that one can also make a business out of watchdogging–or at least that model used to work for some Old Media outlets. // In China, Old Media has its roots as propaganda and has only partially transitioned to a model of independent media, with commercialization coming before watchdogging. A watchdog role is still severely lacking, but Weibo and New Media are a step in the right direction.” [Kai Lukoff, Tech Rice]

I know this is terrible, but I’m reminded of this Perry Bible Fellowship comic. “At around 11 a.m. on July 6, a lightning hit the roof of a pig barn in the suburb of Shenzhen, Guangdong province, and ripped open a 4-meter long crack. 53 pigs staying inside the barn were instantaneously killed by the lightning strike.” [NetEase via Ministry of Tofu]

Sad as this is, 2008 remains awesome. “It could take 30 years to pay off the $471 million bill for the Bird’s Nest, while the Water Cube lost about $1 million last year even after public financial assistance and the addition of a water park. // And those are the facilities still in use. Venues for kayaking, beach volleyball, BMX, and baseball sit untouched since 2008. Signage and landscaping appear to have gone without maintenance since the closing ceremonies.” [The Atlantic Cities]

A great passage in what should be a boring article for those uninterested in Hong Kong pricing utility services. “Hong Kong does not qualify as a full-fledged democracy even if it has been moving in this direction slowly and unevenly. In some respects, it is saddled with the worst of both worlds: authoritarian rigidity and democratic disarray. This problematic combination leads to a host of ambiguities, generates substantial institutional strains, saps community confidence, and undermines political discipline.” [East Asia Forum]

US politics re: “China” interlude: 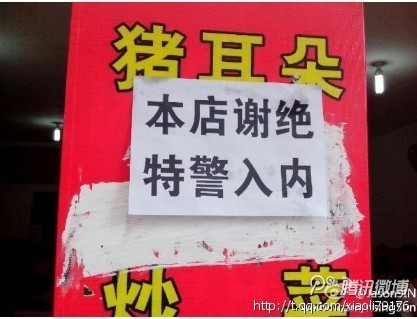