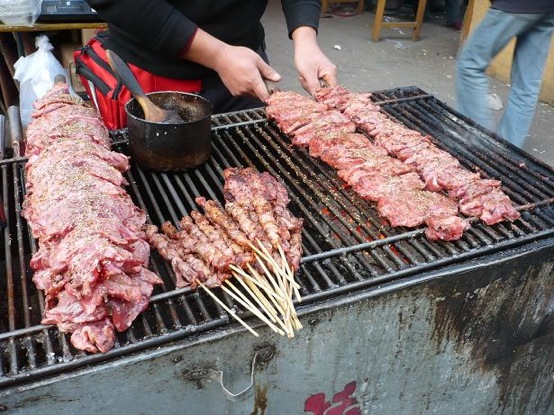 Recently a doctor on Weibo recalled the story of a patient – a kabob (chuanr, in Beijing patois) seller – who came in with stab wounds in the 1980s after getting into a ruckus with a customer. Upon surgery, his problems were found to be far worse than previously assumed. His stomach was riddled with tapeworms.

What prompted this tale?

Mr. Xie from Yongkang, Zhejiang called up Zhejiang Online this week and reported the following story:

Xiao Mei, a 23-year-old girl from Guizhou, went to Shizhu Town, Yongkang, just two months ago to work at a plastic factory with her husband. After finishing her night shift on July 15, she repaired to bed at 4:30 am with a severe tummy ache.

“I felt the ache during work and thought it would get better when I came home. But it didn’t. I can only curl up in bed. It hurts even when I try to stretch,” Xiao complained.

Her husband sent her to People’s 1st Hospital of Yongkang, where doctors decided she had a twisted intestine and needed an operation immediately.

“We knew there might be tapeworms, but we never thought there would be this many,” Dr. Ding told reporters.

Surgery staff were shocked when her stomach was cut open. “Clusters of tapeworms could be seen, everywhere, wriggling in the intestine,” Dr. Ding continued. “They had gotten into bunches in the 0.5m-intestine  of Xiao, and each of them was fist-sized.”

“We took care of the twist and cut a 1 cm entrance… then we spent more than half an hour taking out the worms with clamps,” said the doctor. The tapeworms were about 10 to 20 cm long, pencil-thick, and amounted to between 200 and 300 in total.

Xiao Mei later said she grew up in the country and used to eat fruit from the orchard without cleaning them. (So did I, but I don’t have a tapeworm convention in my belly. Or do I?)

This story also gets just a little worse: apparently, (like a dog) the young lady has been on anti-worm medication for years, until she noticed there were no more worms in her (presumably irregular) bathroom visits. Thinking it was time to dump the meds, as it were, rather than vice versa, Xiao went clean. The stomachaches began soon after and continued until the above events.

The story of the Beijing chuanr seller who got high on his own supply was disinterred for Weibo readers’ consideration. It has a hint of urban myth about it, except urban myths tend to sound implausible the second you hear that “my friend’s mom knew a babysitter who…” and then get quickly less credible than a People’s Daily editorial. This, combined with long-standing rumors that street mutton is most likely cat meat soaked in sheep urine, is yet another reason to avoid street food like Dengue fever.

What? No, we don’t have any fucking photos. Think about it: really? You ate there last night.