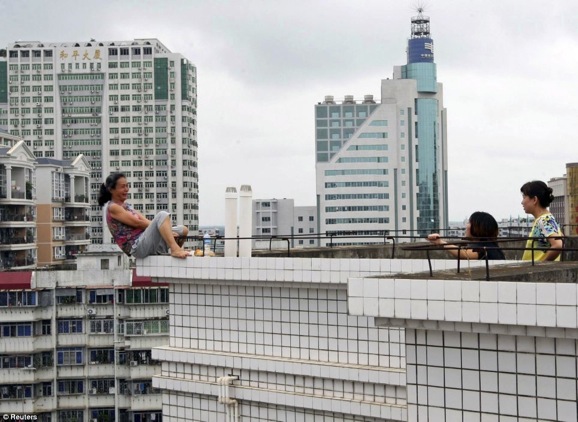 Last Tuesday morning, a woman threatened to jump off the 9th-story roof of a commercial building in Zhanjiang, Guangdong province, and certainly would have if not for the intervention of family and rescue workers — eight of them by my count, including her daughter, as shown in these stunning pictures from China Daily/Reuters, posted on Longhu Net/Sina, Daily Mail, et al.: 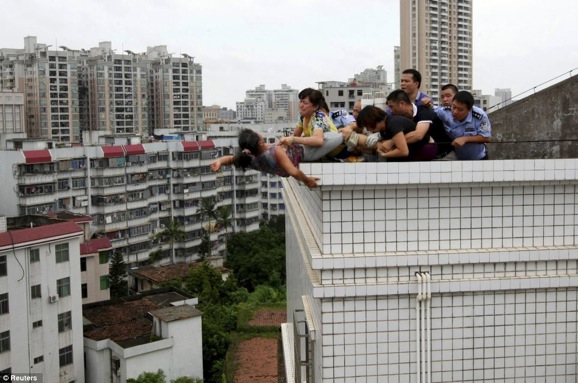 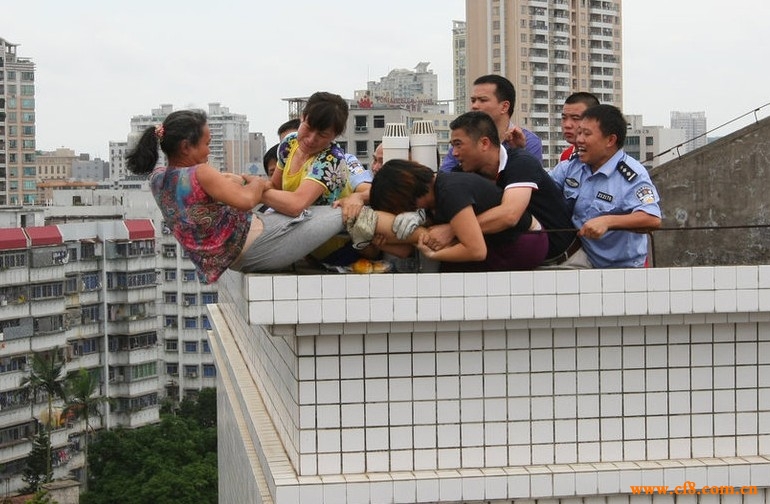 Rescuers tried reasoning with her for four hours. Yangcheng Evening News reports that at 11:35 am, the woman’s daughter arrived at the scene.

…seeing her daughter, she cried and said: “Daughter, you’ve finally come, I just wanted to see you one last time, now I can jump…”

The daughter wailed, “Mom! Why do you want to jump? If you jump, I’m going to jump with you!” in an attempt to move her mother’s heart.

“You have such a great daugther! Why are you willing to part and let her follow you to her death?” Zhao An followed, opening up the psychological fight.

Eventually, everyone moved in, wrestling the woman down like a “tug-of-war.”

Now. What if I told you this woman was a murderer?

Specifically, that she was fresh off killing her four-year-old nephew as the result of a dispute with her sister-in-law? That she had choked him in the bathroom until he passed out, then took his body to the rooftop and threw it off that very ledge?

According to Yangcheng Evening News, the act was the climax of a longstanding and incredibly bitter family conflict that saw the sister-in-law try to poison the other family. (!)

We’re given no details as to what the confession was like. It’s pretty hard to imagine.

And then there’s this, from Daily Mail (sic):

The horrific truth behind her suicide attempt was unveiled when she had been brought off the ledge.

‘She admits she’d thrown the boy’s body off the same roof.’, a police spokesman told local media. ‘She will still die now, but by a firing squad for murder.’

We’ll have to leave it at that for now.