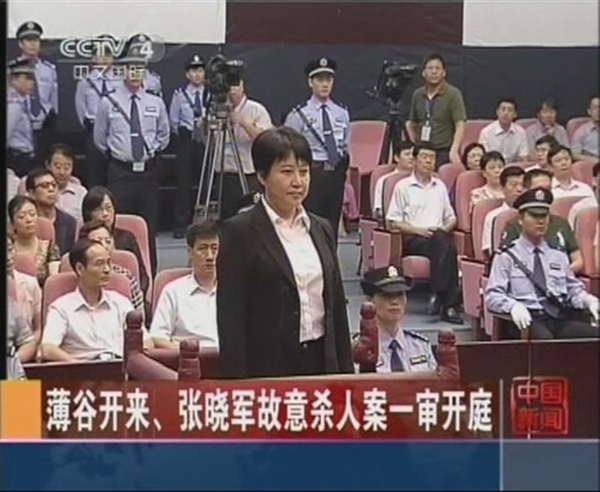 Donald C. Clarke, professor of law at George Washington University, recently translated an account of the Gu Kailai trial and posted it on his website, Chinese Law Prof Blog. The account was written in Chinese by Zhao Xiangcha, titled, “A Record of my Observation of the Murder Trial of BoGu Kailai and Zhang Xiaojun.” Zhao notes that he wasn’t allowed to bring in any recording equipment — he even had a small pencil confiscated at the door — so all his observations (and there are plenty) are from memory.

The lack of a recording device may have been blessing in disguise, because we end up getting a concise summary of the events preceding Neil Heywood’s murder, including Gu’s fear that he had kidnapped her son, Bo Guagua. He also observes that, “BoGu Kailai was relatively calm all the way through, but was unable to hide her intense anxiety. I could clearly see her hands trembling. She said nothing in her own defense, leaving it all to her attorney(s). Her voice was soft and she spoke standard Mandarin.”

Those behind the Great Firewall can read Clarke’s translation here. Some highlights:

Heywood thereupon sent an email to Bo Guagua demanding 10% of his expected profit, i.e., 14 million pounds. Bo Guagua conceded that his family should bear partial responsibility, but there was a great deal of disagreement over the specific amount. After a number of communications back and forth that produced no result, Heywood turned to threats, and held Bo Guagua in soft detention (软禁) at his [referent unclear] home in England, using this to pressure Gu Kailai.

Gu first plotted with Wang Lijun. She wanted to frame him as a drug dealer. At this time Heywood was in Beijing. They would lure him to Chongqing, then use the excuse of his resisting arrest as a drug dealer to shoot him to death on the spot, thus getting rid of him.

Wang Lijun at first took part in the plot, but later on, perhaps fearing the risk, did not want to continue his participation. Gu then decided to do the job herself. On the pretext that she wanted to do an experiment, she got hold of some “Three Steps, Down” [presumably meaning the poison victim falls down dead after taking only three steps following ingestion] dog poison through some Chongqing mafia people. The seven people who supplied poison to Gu were subsequently arrested on suspicion of drug dealing.

Gu Kailai entered Heywood’s room by herself while the other three waited outside. She drank together with him – about 350 ml. of 80-proof (40% alcohol) whiskey. Heywood’s alcohol tolerance was low, and he got drunk and vomited (a great deal of vomit was found on the scene). He was woozy and lost the ability to resist. At this point Zhang Xiaojun came onto the scene of the crime and gave the poison to Gu Kailai. He also dragged Heywood from the bathroom to the bed. When Heywood wanted water after vomiting, Gu Kailai took the opportunity to give him the poison. She also dumped at the scene some drugs she had prepared beforehand in order to create the impression that Heywood was a drug dealer. When the two discovered the Heywood had no blood pressure (they could not be sure he was dead), they left the scene. Gu switched on the “Do Not Disturbed” indicator and told the hotel staff that Heywood was drunk and was not to be disturbed. At 11:38 p.m. that evening, the four left the scene.

Two days after the murder, on Nov. 15th, the hotel staff, on finding that Heywood had not left his room for two days, [felt that] something strange was up, and discovered that he was dead. They called the police. Under the direction of Wang Lijun, the Chongqing police undertook an inspection of the crime scene and gathered evidence. They took a blood sample from the victim and did a CT scan of the corpse. Wang Lijun and several other senior police officers, in order to conceal Gu’s crime, personally carried the blood sample and other important evidence with them for a day, in violation of law and in a departure from judicial procedure. (This laid the groundwork for later doubts about the case, as recounted below.) Because of his involvement in the case, in order to escape criminal responsibility (or for some other reason), Wang Lijun later went to the American consulate.

She fully admitted her acts in the case without reservation; she offered no objections. She made only three clear points when she spoke: (1) She felt that the prosecution’s account of her motive was not full enough. (2) She sought to reduce Zhang Xiaojun’s culpability, and asked that he be given a lighter sentence. (3) She felt that it was improper for Wang Lijun to appear as a witness in this case and that his testimony was concocted. In her confession and recorded [statement], she repeatedly emphasized Wang Lijun’s insidiousness. As for the reason, everyone should judge for themselves.

Zhang Xiaojun had no objection to the prosecution’s evidence or charges.

In the final statements of the accused, they both admitted guilt and showed relatively sincere repentance.

The whole courtroom was quite quiet. During the long stage of introducing evidence, some of the audience slept and was audibly snoring.

Because of course. What a great little detail — you can just picture the scene, right?

4 Responses to “Fascinating Detailed Summary Of The Gu Kailai Saga, As Presented At Trial”