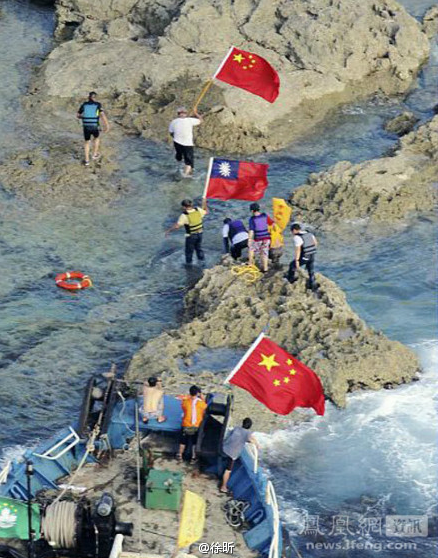 Music fans will either rejoice or wallow in the fact that there are two notable music events happening tomorrow night: the 9th annual Punk Festival at Mao Livehouse (which will happen on Sunday as well), and the New Music Showcase at 2 Kolegas. Now, links.

Would it surprise you to know Global Times was the most honest in its handling of the above photo? “The Chinese-language Global Times, a paper frequently dismissed as a “nationalist rag” (and that very often looks like one), in fact made one of the bravest shows. The paper ran the full image — no wily cropping or Photoshopping.” [China Media Project]

And here’s the least honest: “In the original photo, three of the activists are shown holding flags — two from the PRC and one from Taiwan. But in the Xiamen newspaper’s photo, the ROC flag — which has been widely used on the island since 1949 when the KMT retreated to Taiwan — has been magically turned into a Chinese one… // The photo is making the rounds on Weibo today. One user, @小小铜豌豆V, called for Xiamen Daily Editor-in-Chief, Huang Yubin (@黄毓斌), to resign. Another user, @浪子布回头, posted the original photo next to the newspaper’s front page, saying: ‘The media is blatantly fraudulent! What kind of country is this?! Bah!’” [Shanghaiist]

The foremost expert on Chinese basketball today on national team coach Bob Donewald’s departure. “If Chinese basketball is going to catch up to the rest of the world one day, they’ll have to eventually run their program accordingly. Again, whether the CBA decides to take a knee-jerk reaction to what’s gone down in London is anybody’s guess. Yet what Donewald’s been able to do — and teach — to people inside Chinese hoops about the modern requirements for developing a National Team should certainly be beneficial in the long-term for both the country and the next coach who replaces him… // …at the end of everything, Donewald can go out with a title that nobody in China can take away from him: A winner. We’ll see in 10 years if we can call him a pioneer, too.” [Jon Pastuszek, NiuBBall]

Man with bionic, self-made hands is awesome. “A man who lost both hands when a homemade bomb exploded has finally created a new pair of arms after eight years of planning. // Sun Jifa could not afford the hospital’s prosthetic limbs after the explosive for blast fishing detonated prematurely, but desperately needed the use of his hands to work on the family farm. // …Now he plans to develop the design for other similarly disabled people. // ‘I made this from scrap metal for virtually nothing. There is no need to pay hospitals a fortune,’ he said.” [Daily Mail]

Jewish studies are burgeoning in China. “Why, one might ask, do these students devote many years of their lives to studying Jewish history? As a number of them told me, they sense an affinity between their people and the Jews. Both peoples possess a noble ancient history, have large dispersions outside their homeland and are marked by an entrepreneurial spirit. Perhaps most centrally, for both, education is an almost sacred pursuit. In fact, one of the most winning features of the Chinese students is their unabashed reverence for the teacher. The Confucian ideal, parallel to the Jewish precept of ‘kevod ha-moreh,’ is alive and well today.” [Jewish Journal]

Of course. “Friends of Neil Heywood, the British businessman whose death in China triggered a political firestorm, have questioned Chinese prosecutors’ account of how and why he was killed—especially the claim that he threatened the safety of the son of ousted Communist Party official Bo Xilai.” [WSJ]

“Chinese Consumerist Revolution.” “She settles on red, the same shade as the Young Pioneer scarf every student has to wear in grade school. He swipes 12,200 yuan, nearly $2,000. The whole process takes less than ten minutes. Moments later, they’re driving off in an Audi with People’s Armed Police license plates.” [New York Magazine]

Is lingerie football coming to China in the same way SlamBall is (i.e., not)? “China will get a close-up look at the Lingerie Football League in December when the upstart American circuit undertakes a three-game swing through Beijing, Shanghai and Hong Kong with a long-term view to forming an Asia league. // Described by league founder Mitchell Mortaza as a ‘hybrid of American football meets Gladiators,’ the three-year-old LFL, featuring lingerie-clad women in football equipment, has aggressively been building a ‘global footprint’ through expansion.” [Xinhua]

Sad: water shortages in Yunnan. “Third-grader Liu Hongli spends half an hour walking to school every day. She said that when the weather was really dry, teachers had to drive a truck long distances to collect water. At home there was no tap water either, so villagers had to get water from a well.” [Global Times]

App search function in Chinese is buggy. “Though the issue is a relatively minor one, it underscores a problem of perception that Apple faces among the Chinese market. Recently, the company came under criticism from Cantonese speakers after the launch the iTunes Store in Hong Kong. Locals complained that Apple was using Mandarin romanization for the titles of Cantonese pop music, a move that carries with it certain sensitive political implications.” [The Next Web]

Last emperor of China Henry Puyi’s former Beijing home demolished. “The former residence of the last Chinese emperor, Aisin-gioro Pu Yi, has been torn down after the structure was allegedly damaged beyond repair by the July 21 rainstorm. // The residence, in Dongguanying Hutong, Xicheng district, was in ruins on Wednesday, with several construction workers clearing up the bricks.” [Global Times]

An excerpt from Xujun Eberlein from the anthology Chinese Characters: Profiles of Fast-Changing Lives in a Fast-Changing Land, co-edited by Angilee Shah and Jeffrey Wasserstrom. [Asia Society] 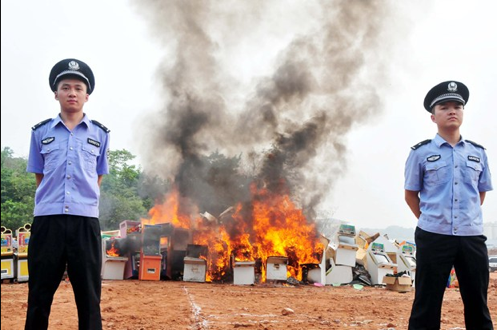