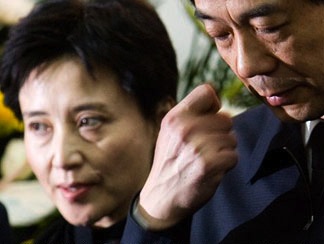 If you were counting, the “trial” lasted all of a few hours, ending just now with Gu Kailai not contesting the charge that she murdered British businessman Neil Heywood. So much for transparency of law. Did we learn anything from this process? Gu was never going to win their game, so she didn’t play. A date for a verdict hearing will be announced later, but why should any of us bother caring? She will get a death sentence with a two-year reprieve of execution, and then she’ll get to live out the rest of her days in a glorified retirement home for “jailed” Party officials. Something like this. No one will remember to execute her, or that she committed murder. Next year, she will be a trivia question at some esoteric quiz in a Chelsea bar, and only one or two teams will remember that her husband’s name was Bo Xilai. Bo Guagua, meanwhile, will continue being Bo Guagua, which we imagine can’t be too difficult. The rich will continue feeding off everyone else’s work and sending their riches abroad. The skies will be blue, on some days. A man will wake up and, motivated by a TED talk he heard the previous afternoon, will choose to make someone’s day a little better, and a street beggar, that moment, will die.

2 Responses to “Just Like That, Gu Kailai’s Trial For The Murder Of Neil Heywood Is Over”