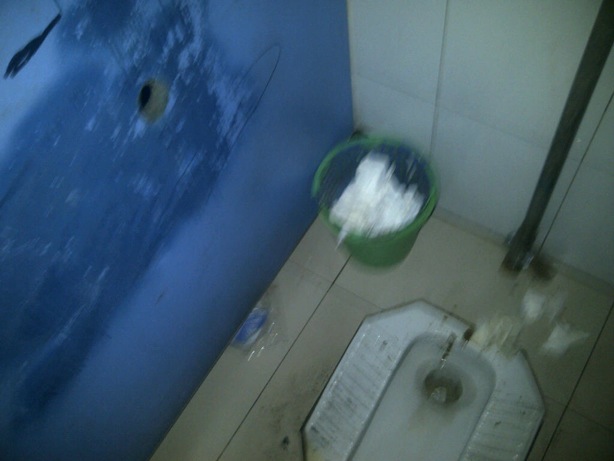 You’ve probably wondered how the Chinese public bathroom experience could be made any less savory.

We’ve seen a few methods: stinging nettles around an earthen hole; a local pensioner eyeballing the foreigner’s bowel movement. Routine stuff. But how about an unwelcome penis being jabbed in your eye?

Head out to the Chanping public bathroom, close to their shooting range, where you’ll find what is — for us, at least — the extremely rare sight of a Chinese glory hole.

The startled friend who captured this unexpected image told us that the glory hole wasn’t in actual use when he came across it (on what must have been a pretty damn urgent bathroom break), but the scribblings on the wall left no doubt about its purpose. Take a look at the picture he snapped; you’re already feeling frisky, aren’t you?

“The messages didn’t reference the glory hole itself, they just said ‘homosexual’ (同性恋) followed by [various] mobile phone numbers (not an uncommon thing to see on BJ bathroom walls),” said the photographer, who wishes to remain anonymous.

If nothing else, this proves that China has the ability to keep on surprising.

Readers with particular insight on unusual sexual subcultures in Beijing are welcome to contact rfh@beijingcream.com or share in the comments below.