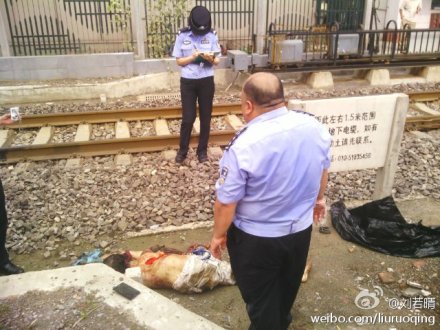 Weibo user Liu Ruoqing sent out a message yesterday at 8:18 am with the attached picture, which is sort of graphic except not really: is that even a body? Which leg is his left and which is his right? It’s a question that police at the scene apparently couldn’t even answer. Quoting (translation mine):

Next to Wudaokou subway station, a passerby who got hit and killed by a train. The carcass next to the tracks is beyond recognition, even the police investigating the scene couldn’t figure out the left leg from the right leg…… [candle emoticon]

If you live near Wudaokou and know anything about this, please drop us a note or leave a comment.

According to a female witness surnamed Zhao, a middle-aged looking woman tried to cross the tracks after the alarm sounded at around 7:30 am.

“Then I heard the great noise of the train braking,” she said.

“The train stopped tens of meters away from where the woman was knocked down. The drivers got out to see the woman, who was already lying dead under the wheels,” Zhao alleged.