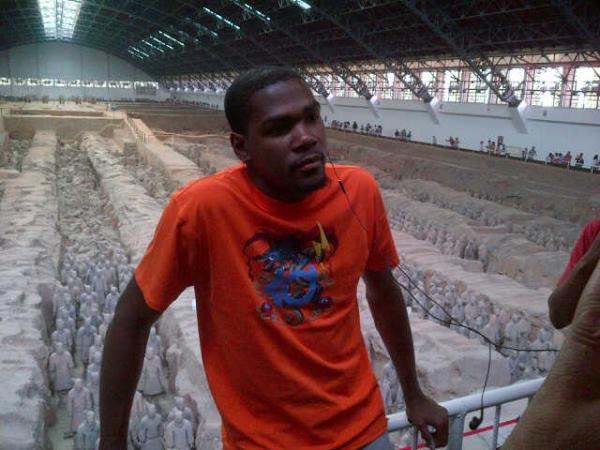 Kevin Durant with the Terracotta Warriors, posted on @KDTrey5, via @blackChinahand; more pics of his visit to Shanghai and Xi’an via Beyond the Buzzer.

First Floor might have a good Monday food deal, but Tuesday’s all about half-price food night at Brussels. (Bear with me, people, I’m warming up for Restaurant Week.) Eat well over links.

Crazy. “Just after 10 am yesterday morning, when the company’s Party leadership committee was having a meeting on the sixth floor of a company building, a retired former female employee of the company, Shi Mou (石某), suddenly burst into the room and started spilling gasoline all over the room and igniting it. In the ensuing fire, three people were burnt to death and four were injured.” [Danwei]

On Han Han’s relative obscurity outside China. “One reason his global fame might trail that of other Chinese figures could be that nothing he has done has garnered international headlines of the sort that came with Ai Weiwei’s arrest, Liu Xiaobo’s Nobel prize, and Chen Guangcheng’s escape. It’s one thing for an individual to be profiled in magazines, and quite another for him or her to do something that lands them on the front page or the CNN news ticker, displayed on muted televisions at airports and in gyms. And there is something about the narrative of the brave, rebellious dissident that appeals to Western audiences in a way that an inside-the-system blogger might not.” [Jeffrey Wasserstrom, The Atlantic]

How soon until this program is canceled? Then again, 电视问政 (Ask a Politician on TV) could be revolutionary. “The program is a joint production of Wuhan TV station (武汉广播电视总台) and an office under the city government that’s responsible for finding solutions to every day problems (治庸问责办公室). The show is broadcast live and this season it’s aimed at ‘Resolving Wuhan’s Ten Most Pressing Issues.’ // During last year’s season, members from the city’s Communist Party Standing Committee and deputy mayors also appeared on the show. // The program has aroused heated public debate in Wuhan and around the nation. The EO has learned from the local Commission for Discipline Inspection of the CPC that they’re planning to make the program a regular feature that will allow ordinary people to track the performance of government. // ‘The TV program is just one thing,’ said Che Yangao (车延高), member of the local Standing Committee of the CPC and secretary of the local Commission for Discipline Inspection. ‘From this one point we want to make a larger impact.’” [The Economic Observer]

“Chinese officials are extremely good at seducing Western businessmen with friendly gestures and generous promises.” “One of the most glaring, if unremarked, oddities concerning China nowadays is how perceptions of its leaders diverge depending on the observer. In the eyes of the Chinese public, government officials are venal, incompetent, and interested solely in getting lucrative appointments. But Western executives invariably describe Chinese officials as smart, decisive, knowledgeable, and far-sighted – roughly the same adjectives that they once used to describe Bo Xilai, the disgraced Communist Party boss of Chongqing, before he was purged. // …A third reason why Western businessmen get China wrong is that their admiration of the Chinese government is a reflection of their frustrations with their own governments. They have grown impatient with the messiness of the democratic process, stifling regulations, high taxes, and media scrutiny.” [Project Syndicate]

The Atlantic’s Helen Gao on learning English. “At the discussion table in my college English seminar, or in the crowd of a Friday night happy hour, the air suddenly feels thicker, my tongue heavier. I find myself haunted by an uneasiness I remember from my first English lesson, an uneasiness, I’ve found out by talking to others, shared by many advanced foreign language speakers.” [Tea Leaf Nation]

It’s because of this, isn’t it? “Stephen Shen, Environmental Protection Administration (EPA) minister [of Taiwan], said that sitting on the toilet like women do creates a cleaner environment. // This has generated a lot of online debate, says the BBC’s Cindy Sui. // Officials are to ask local governments this week to put up notices in public places advising men to sit.” [BBC]

Yao Ming calls for more sports programs in schools. “‘The development of school sports activities in China remains small. Sports still lag far behind studies in terms of importance in student’s school lives… // Sports should play a much bigger role in school life for kids than it does now. By taking part in sporting activities, kids can be more confident and happier.’” [China Daily]

Bummer, no sex at PKU. “Peking University (PKU) said Tuesday that an internal investigation has so far uncovered no evidence to support the allegations of inappropriate sexual behavior between faculty members and staff at a restaurant near the campus. // However, some social commentators have said that for the sake of the university’s image, it may have been better to have had an independent investigation.” [Global Times]

Former top official under investigation flees with 200 million yuan? “Wang Guoqiang, who was party secretary of Fengcheng city in Liaoning province, left for the United States in April with his wife, the People’s Daily said. // Local officials said Mr Wang, who was being investigated for corruption, had been removed from his post, it said.” [BBC]

Don’t look now, but Shanghai Shenhua haven’t lost in the last seven matches. “Two months into the second phase of the Shanghai Shenhua revolution, with Didier Drogba freshly installed as the team’s new alpha male, the team have gone unbeaten over seven games. It’s all very unusual for the average supporter in the blue half of Shanghai- before this recent run of form began, Shenhua had just lost to Qingdao Jonoon and were looking like they were being sucked into a legitimate fight to stay out the relegation spots.” [Andrew Crawford, A Football Report]

Han Han and Ai Weiwei are notable mostly for being the best things that ever happened to journalists who don’t speak Chinese.

Congratulations are in order as this blog approaches its 10-year anniversary: [Wangjianshuo]

We haven’t had art in a while, so apologies. Here’s “Chinese art academies’ best of graduations 2012,” featuring CAFA. [Drawing Beijing]

A review of the Beijinger’s New Music Showcase. [Beijing Daze] 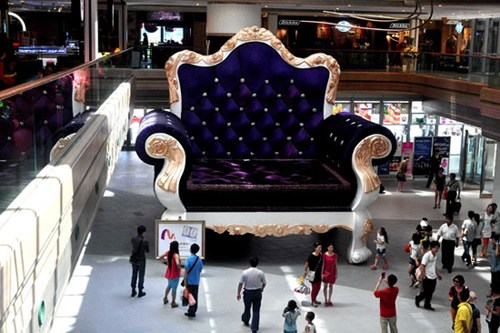 Largest sofa in the world, in Shanghai [Photo/Asianewsphoto], via China Daily