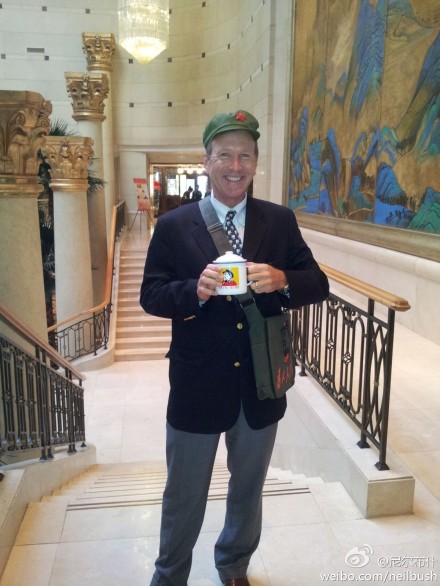 Neil Bush isn’t nearly the public figure that two of his siblings, Jeb and George Walker, are, but as a businessman and philanthropist and son and brother of former U.S. presidents, he’s made the news cycle a few times in his days. (Possibly most notably — and unfortunately — for a high-profile divorce in which he admitted to consorting with hookers in Thailand and Hong Kong; he may or may not have contracted herpes from one of them.)

I’m thinking of joining the CCP. What do you think of my accessories? 我正在考虑加入中国共产党。你觉得我的装备怎么样？

No comment from us. I’ve randomly translated some Weibo comments though, and they’re what you might expect: the whole gamut of serious and frivolous, in on the joke and totally not. Perhaps most interestingly, several netizens have used Bush’s winsome — though probably misguided — picture to express displeasure with their own government (the last comment puts it most pithily, I think). Also, because this is Chinese Internet, there were emoticons.

@作家天佑–: Your bag isn’t big enough, after joining the Party you won’t be able to wangle much money.

@张晨琛director: Do you know how to wine, dine, whore and gamble? Defraud, deceive, swindle, abduct? No? And you still want to join the party?

@袁莉wsj: So many capitalists want to join the Party, you’re not the only one, reckon you have to line up, also withstand examination.

@静持大师: Know how to write a thought report?

@手指那天边的大海: you can be the secret agent for CCP and please contact San Mao.

@程小胖的家: chinese people don’t like ccp, it is not a good joke.

OK, we have one comment. Bush should have worn this shirt: 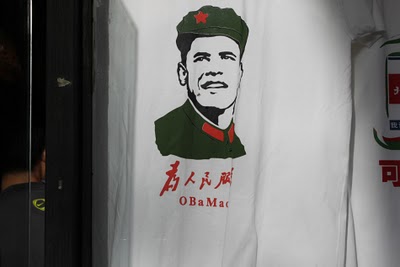 9 Responses to “Neil Bush On Sina Weibo: “I’m Thinking Of Joining The CCP. What Do You Think Of My Accessories?””