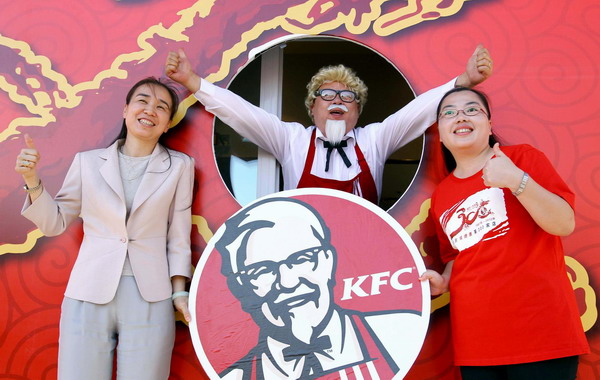 Going to KFC is like reaching into a grab bag of awful and grief. The Colonel peddles a strain of juiced-up flesh that has contributed far too long to our society’s headlong dive into self-wallowing and idiocy. How many children have grown up illiterate due to this mountain man’s white provender? How many more need to die at the feet of health? We are rendered limp and ineffectual, only left a winkling of desire for something better, yet hollowed out by an aggressive, malignant grease, we but clutch an unfounded hope, a fading star, a sad velleity.

We’re unfamiliar with the mechanics of KFC’s slow-acting toxin, like malice itself which stews in the black chambers of the human subconscious, but we can surmise that it lines our brain cells with a cushion of congealed fat and replaces our heart with globules of marshmallow lipids. It’s steroids for the taste buds, coated with the plastic of dough and deep-fried in what must be, in a nearby alternate universe, MSG-infused gasoline.

And the service. Holy shit, does it take 10 minutes to fry a damn wing? In the time it takes to bring out an order, one can get a fucking mango ceviche at a local sit-down. If you’re going to sell me my death, you might have the courtesy to not make me suffer in the presence of your other condemned.

We’ve come a long way, you and I. Three hundred restaurants in Beijing is not insignificant. Three hundred poison factories churning out the same addictive, mind-altering sustenance toward which our days are warped. And when the long night falls, doubled over on the toilet, unsure if it’s bile we ralph or puke we shit, let your lessons never be forgotten, and let our sober mantra be remembered during our weaker times when craving overpowers self-control:

McDonald’s is much better.

Image caption via China Daily: “Two customers pose with a staff member dressed as the mascot of Kentucky Friend Chicken, Colonel Sanders, for photos at the opening ceremony of the 300th restaurant in Beijing. Yum! Brands Inc, the Louisville, Kentucky-based company, which owns both KFC and Pizza Hut, has over 3,800 KFC restaurants on the Chinese mainland 25 years after it entered the market. [Photo/Xinhua]“

One Response to “The Unadulterated Misery Of KFC: In Commemoration Of Its 300th Store Opening In Beijing”