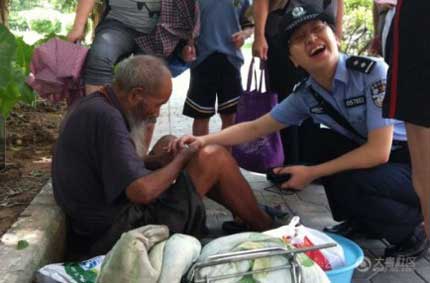 Last Friday in Shenzhen, someone snapped pictures of this policewoman cutting the nails of an old man on the street, and a few days later the images found their way to Sina Weibo, where they quickly began to circulate because acts of common decency, especially by cops, rarely get the play they deserve. The officer had no expectation of making the news, she just did it because it seemed right. Journalists eventually interviewed the cop, Hao Jieshu, who said, “He told me at the time he didn’t know how to use (the clipper), so I just helped him cut his nails. I didn’t think it was anything special.” She was later officially complimented via Shenzhen’s Public Security Bureau Weibo: “Miss Hao is usually a warm-hearted young lady, a careful and responsible worker, a good person!”