A man (either 43 or in his 20s, depending on your source) has been arrested for attacking four people with a knife yesterday at Shenzhen Pengcheng Hospital. In the video (somewhat graphic), you’ll see him patiently waiting for his otolaryngologist (ENT doctor) to appear, then producing a vegetable knife from his bag and slashing the unsuspecting doctor. We’re told the man did this as retaliation for not getting satisfactory results from his rhinitis treatment. He then injures a female hospital guide and security guard before seizing a nurse and slashing her more than 20 times.

Presently, all four have been treated and will be okay. Youku video for those in China plus some pictures after the jump. 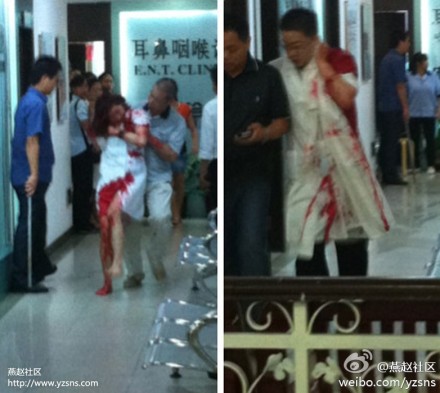