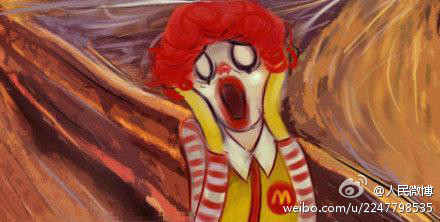 We’ve survived the black and white burger. We’ve done beef and mash. We’ll happily tolerate every chicken and/or beef concoction McDonald’s throws at us. But this?

“McNoodles” will go on sale at its Austrian restaurants from Thursday in a test set to last two to three months, a spokeswoman said.

The meals feature noodles with vegetables, chicken, salad and either sweet-and-sour or curry sauce, and will cost around 4.99 euros ($6.56).

The company said it hoped to tap a trend toward noodle dishes and show off its ability to innovate by launching the products, which it will import from Thailand.

Hmm. Bring it on!

We fear for Ronald’s well being though. If he’s not rolling in his clown grave, he’s indeed belching a silent scream. Five-euro fast-food noodles from McDonald’s? Yeah. That’ll be the day…