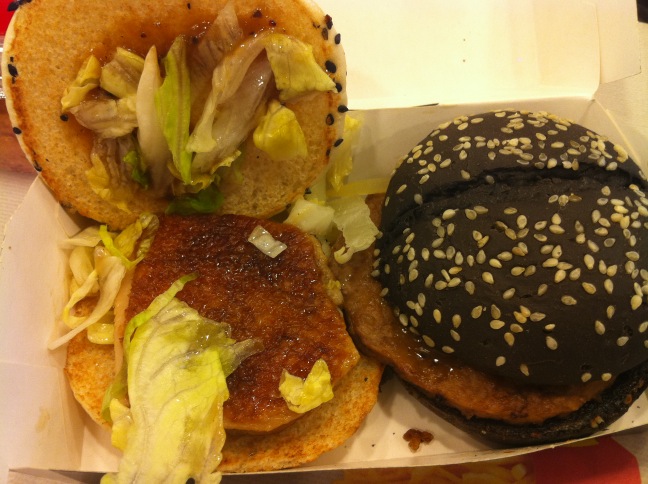 Idea for an honest advert:

Scene: A log cabin in remote woods. Five teens of mixed ethnicity/affability convene in a spooky basement to investigate a noise. Suddenly, the cast-iron stove in the back noisily cranks into action, pipes groaning. The teens gather round as, inside the stove, coals glow red-hot and wisps of smoke emerge. Suddenly the door bangs open, startling everyone. Inside, some kind of burger can be seen.

Hot blonde: Eww. What is it?

The others turn to stare at the Asian American as the camera slowly zooms in on his horrified features.

Maybe I should do more horror scripts; this stuff writes itself. Last week or so, I got a text from someone I hadn’t heard from in a while, who got straight to the point: “There is an ungodly new macdonalds burger” [sic].

“How unholy are we talking about here?” I wondered, not bothering to ask how he’d been; we both instinctively knew this was more serious. The reply took a while but simply read: “Dante levels.” (I haven’t heard from him since).

I’d eaten (and enjoyed) McD’s last lab experiment, a mashed-potato burger, which seemed to appall most right-thinking people on instinct – as if having mash in a sandwich was so much stranger than stuffing your maw with a burger and fries. And I’m all for encouraging Ronald to experiment (incidentally, I’ll ask again: why hasn’t the McRib stormed China? The market is surely custom-built for it. Release the swine, Burns).

But this… this is not what I meant, Ronnie. (If I could, I’d insert a gif here of Fat Tony asking Bart Simpson, “What is this flat and flavorless Manhattan?”) Your  “black-and-white” burger is everything a burger should not be. And yeah, I know I’m late to the game on this — the burger is two weeks old — but I wanted to give you a chance.

A burger should not be black; nor should it be white. It should be – I don’t know – burger-colored? Looking at it should inspire, at the worst, indifference, but hopefully some kind of appetite. I’m not saying a McDonald’s burger should be an aspirational product, but can there be anybody who’s looked at this sandwich on a billboard and thought, “Mm… that’s lunch sorted, right there”?

I paid 16 yuan for a “pairing” (without a drink and fries; this thing didn’t deserve that kind of back-up). What we’re talking about here is two mini-burgers, similar to those overpriced “slider” meals you get at upscale grill joints, except this slide ends just as you’re getting on the ride. It’s just as well.

Although the advertising suggests (to me) that you’re getting two different types of chicken burger, I ended up with potluck. The staff usually seem shellshocked to be working at a fast-food joint at their age and aren’t down with thinking the concept through, so I got a beef patty – that is, a dried-out disc of crumbling beef-meat, roughly half in size as that of a typical patty – in a white bun, and the chicken ended up in the black bun, which looks like a charcoal biscuit.

The beef-based burger came with a loathsome attempt at black-pepper sauce, which is itself not something you ever really need to add to beef unless you’re trying to mask its taste or quality. Unsurprisingly, it’s slavered on with a kitchen shovel here. Result: two unpleasant tastes (the beef smelt of salt; think about that) in fierce competition with each other. As for the chicken condiment, it was like Fukuyama’s answer to the Indian chutney craze.

This meal offends everyone. I would sooner eat a century egg bathed in stinky tofu with a chicken-foot garnish than order this again. As for Han diners, it is probably deserving of a Xinhua editorial. If this burger were a mascot, it would be the official sponsor of the Pyongyang Olympics.

But hey, it does have one redeeming quality: it’s black… and white. Get it?

Scene: A red, rusted Volkswagon pulls up to the drive-thru of a McDonald’s at night, with crickets chirping and stars twinkling. A man is driving the car, his face shrouded in shadow.

Blonde: Hello sir, may I please take your… [blanches]

Man: Yes, I would like a black and white burger.

The blonde is too shocked to speak, but her Asian American manager peers over her shoulder and whispers into her cheek: It’s OK. Ask him if he would like fries and a Coke with that.

Blonde: Uh… would you like fries and a Coke with that?

Man, leaning forward to reveal red skin and horns, twirling his goatee with a glint in his eye: Yes. Cold fries, please. And a Coke Zero.

Satan turns to the camera, smiles, and winks. Hold the shot for one extra second. Fade to black.

Leave a Reply to Reece