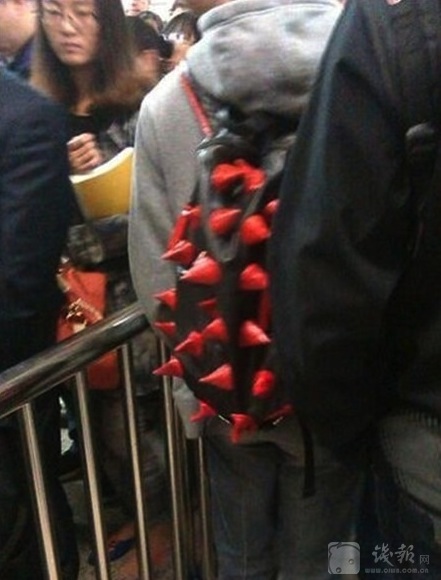 Who doesn’t hate congested subways, right? But who would be shameless enough to wear a backpack full of red spikes that poke anyone who dares get close?

On Sunday on Beijing Subway Line 5, according to Beijing Morning Post, a man was spotted wearing the above. The journalist says judging by the picture, even though there was a big crowd, people were conscious of this particular man with the spikes and tried to keep away. (Not sure if I see that, but we’ll roll with it.)

After a bit of research, the journalist learned this bag apparently has a name: “hedgehog backpack.” An online vendor based in Hangzhou said that his primary customers are young people in their 20s and early 30s, and that the bag only began selling this year. “Every month we can sell at least a dozen or so bags,” he said. Several similar products exist, whose spikes’ intended purpose is to keep others away.

You’ve heard of personal space bubbles, the theoretical area around a person that one shouldn’t enter without permission? This takes that to the next level. It makes me wonder, however: whatever happened to the old ways of keeping people at a distance, i.e. never showering and blogging 14 hours a day?

Beijing Subway authorities said these items aren’t yet on their list of banned substances. But while we’ve acknowledged that spiky backpacks aren’t on the same level as handguns and explosives, you’re not less of a nit to tote such a thing. China is crowded. If it’s personal space you desire, you can get a car and see how that works for you.

One Response to “Dislike Congested Subways? Try On This Backpack Of Spikes For Size”