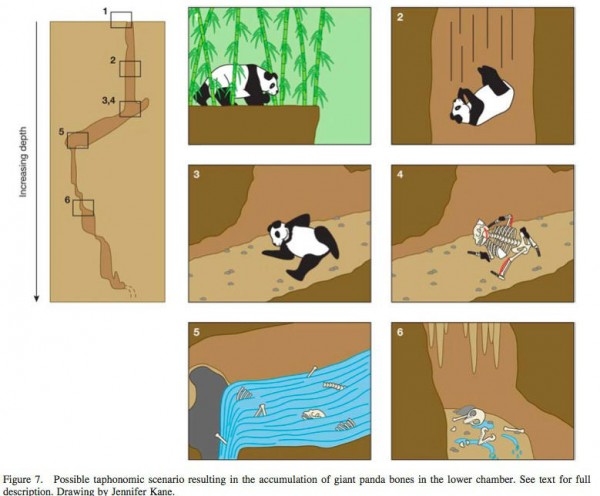 Via Boing Boing: “This illustration comes from a recently published paleobiology paper examining a cache of animal bones and pottery found in a sinkhole near China’s Jiangdong Mountain. // One of the key things the researchers are taking away from this site: The range of the Giant Panda must have once been a lot larger than it is today.”

An article that will probably make women unhappy, angry. “The headlines scream like sensational tabloids: ‘Overcoming the Big Four Emotional Blocks: Leftover Women Can Break out of Being Single.’ ‘Eight Simple Moves to Escape the Leftover Women Trap.’ And my personal favorite: ‘Do Leftover Women Really Deserve Our Sympathy?’ // These eye-catching topics do not appear in supermarket-aisle gossip magazines. They are articles about single, professional women published on the Web site of China’s state feminist agency, the All-China Women’s Federation. The Communist Party founded the Women’s Federation in 1949 to ‘protect women’s rights and interests.’” [NY Times]

Chai Happens. “Forced evictions in China have risen significantly in recent years as local officials sell off land to property developers, Amnesty International says. // Many cases involve violence and harassment, in what the group called ‘a gross violation of human rights.’” [BBC]

Corollary: The full report, “Standing Their Ground,” via Amnesty.

Novelist and poet Bei Cun on Mo Yan: “Journalists and friends have messaged me asking for my view, as I’ve expressed both congratulations as well as opposition to the hand-copying [of Mao's speech]. What we must remember is that this is a literature award, and is limited to that profession. As I said several days ago, a writer’s political position will not inevitably affect his or her professional ability, otherwise someone such as Heidegger would be difficult to understand. Writers aren’t saints, maintaining a spiritual contradiction is allowed. I can only hope Mo Yan uses his influence to encourage people to act on conscience.” [John Kennedy, SCMP]

Here, let us exploit the excessive use of transparent glass. “In the interests of raising awareness of the number of peeping toms in Shenzhen, Southern Metropolis Daily has published a selection of photographs up women’s skirts. What a public service! // Apparently, photographers from the paper went to footbridges, stairs and escalators to demonstrate how easy it is to get such shots after hearing complaints about the number of women around the city dressed in revealing clothing. According to the report, part of the problem is the ‘excessive use of transparent glass’ in Shenzhen’s commercial buildings, notably, elevators and escalators.” [The Nanfang]

Not for dog lovers. “It has often happened in China that buying a dog can turn into a nightmarish experience. The same little puppy that looked so lively in the shop window would suddenly become sick beyond help and die. The front page of the Beijing Morning Post today features a harrowing investigation into the dirty secrets of the pet dog market in China.” [Danwei]

Damnit, Elton John! “And just when you were getting all excited to see the Chinese Basketball Association make its triumphant return to Wukesong… Elton John has to come along and potentially ruin everything. // According to the Beijing Evening Post, the rumored end-of-November season opener between Beijing and Shanghai at Wukesong Arena (now officially known as MasterCard Center) is in major doubt because of a scheduling conflict with an Elton John concert booked for the same night.” [NiuBBall]

Huawei and ZTE basically got a raw deal. “Chinese media have named other companies, including brands as diverse as Carrefour, Standard Chartered Bank, Nokia Siemens, Hyundai and Canon, among those that have formed Communist Party committees in their China operations, some dating back to the 1990′s. In theory, every company with more than three Communist Party members is required to have a party committee.” [Tea Leaf Nation]

Apparently any 16-year-old can ground a flight. “A 16-year-old boy who made hoax calls that disrupted two Air China flights has given himself up to police. // The boy, surnamed Chen, was accompanied by his father when he surrendered himself to police in south China’s Guangdong Province on Tuesday evening. // Earlier the same day, flights CA4111 from Lhasa, capital of the Tibet Autonomous Region in southwest China, to Beijing and CA1578 from Nanchang in Jiangxi Province to Beijing were aborted shortly before take-off.” [Shanghai Daily]

As part of the Beijinger’s “11 most-read posts in the history of TheBeijinger.com,” here’s something I wrote back in June 2010, coming in at No. 9. [The Beijinger] 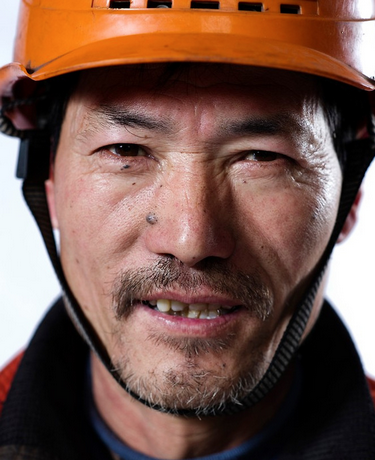 Part of the series “Faces of Made in China,” by photographer Lucas Schifres, via Lens, NY Times