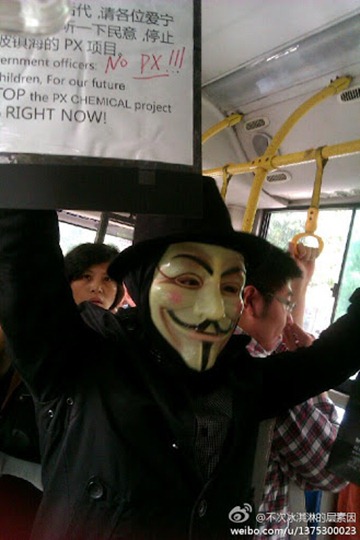 Via Ministry of Tofu

Going out with a costume tonight? Send us your pictures and we’ll post them. For now, links.

Those who control Chinese media probably wish every day was a Hurricane Sandy day. Sorry, Manhattanites. “China Central Television, has dispatched a cohort of reporters to cover the calamity and reserved a significant part of its news program for its coverage. However, instead of focusing on how American people have suffered, most Chinese netizens took the television network to task. // Many net users were furious at CCTV’s benign neglect of civil protests at home (in Ningbo) and attempt to divert attention by giving priorities to situations abroad.” [Ministry of Tofu]

Fallout in Wen Jiabao case, part one: “One of the standard lines going around in recent days has been the notion that this subject is somehow old news, that people already ‘knew’ that Chinese leaders benefit from public office, so why bother? To me, that’s akin to saying that since we ‘knew’ that campaign finance corrupts American government, we shouldn’t have bothered to unearth the crimes of the lobbyist Jack Abramoff; and since we ‘knew’ British tabloids would walk a fine line to get a story, we shouldn’t have gotten so exercised about digging out the details of phone-hacking and the paying of police for information. In the end, that’s the nature of investigation: it puts details on what we don’t know but think we do. Sometimes the conventional wisdom is right, and sometimes it’s wrong, but you never know until you look. Corruption in China, after all, is hardly a scoop in itself. Lin Yutang, for one, wrote, ‘In China, though a man may be arrested for stealing a purse, he is not arrested for stealing the national treasury.’ // He wrote that observation in 1935.” [Evan Osnos, The New Yorker]

Part two: “First, the bad news. The political reformers have taken a serious hit. Unless Wen steps forward publicly to declare his family’s financial holdings, open their books to the public, and indicate the willingness of his family to face up to the legal consequences of any financial improprieties, his legacy will be tainted and the opportunity for him to shape future political events severely constrained. This would be a shame since Wen, alone, has been the torchbearer for political reform within the current leadership. Even more devastating, the fall of Wen could harm the political prospects of the up-and-coming reformers such as Li Yuanchao and Wang Yang. Thus far, Wen has reacted like any western politician: hiring a law firm to fight back against the article’s claims; denying that his mother had personal wealth of $120 million; and arguing that his family’s business is its business, not anyone else’s. This strategy may help preserve Wen’s public face, but it won’t prevent the longer term political fallout within top political circles.” [Elizabeth C. Economy, Council on Foreign Relations]

Everyone feels your pain. “I have just spent an entire day wrestling with my computer and my Internet connection, and I have a strong suspicion that I have been wrestling too, at a distance, with an agent of the Chinese government who has been doing his or her best to frustrate me.” [Peter Ford, Christian Science Monitor]

Sky News team in Ningbo. “A Sky News team were among journalists who were ‘violently’ stopped from reporting on an environmental pollution protest in China. // Sky News cameraman Andy Portch was attacked by plain-clothed men as they tried to prevent him filming a protest over expansion plans for a petro-chemical plant in Ningbo, Zhejiang province. // Police sought to disperse hundreds of people outside the Ningbo city government offices, including an AFP journalist who was briefly detained by police. // Sky’s Foreign Affairs Correspondent Lisa Holland was among a crowd when an official tried to stop her reporting on the demonstration.” [Sky News]

Jointly sponsored by the Ministry of Public Security, National Public Security Literary and Art Foundation, and the Liaoning provincial public security bureau. “A Chinese-language television series set in a detention center started shooting on Monday in Beijing’s suburb Tongzhou. // The 30-episode series ‘Kan Shuo Suo,’ or Detention Center, is the first of its kind and is being shot in a real detention center.” [Xinhua via China Daily]

Corollary: A foreign correspondent’s peek inside. [Tania Branigan, The Guardian]

Guangdong sucks. “After reporting last week that Arenas and the Guangdong Southern Tigers were nearing an agreement over a contract this season, Yahoo! Sports’ Adrian Wojnarowski is now writing that negotiations are at an impasse. // Citing an anonymous source, Wojnarowski’s is reporting that whatever verbal agreements were made last week have essentially fallen apart as there are considerable differences over salary. Guangdong is also calling into question Arenas’ physical condition.” [NiuBBall]

Love affair between a 61-year-old real estate tycoon and 31-year-old actress. “Besides jokes and speculations, one thing is for sure. Wang’s love affair leads to a comeback of discussions on the culture of ‘little third’ (‘小三’ in Chinese, literally means the third person in a relationship.) Wang’s love affair with actress Tian Pujun is seen as an example of how a “little third” has successfully worked her way from a ‘second wife’ to the ‘first lady.’” [Offbeat China]

Election season, feel the excitement. “The same system continues. This is not an election, it’s an exercise in pointlessness. // …America is China with the added bonus of a big lie. It’s North Korea [with] a better propaganda department.” [David Wills]

“Coming out in the countryside.” [Seeing Red in China]

“In China, A Ceaseless Quest To Silence Dissent.” [NPR] 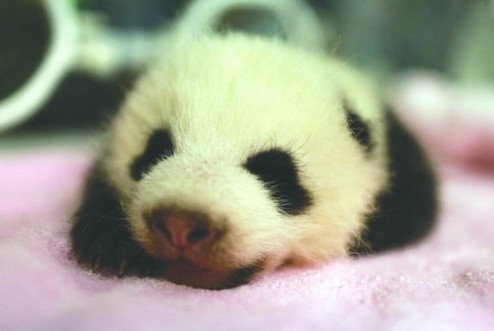 Via Shanghai Daily: “Some people joked about why the organizer didn’t name her Chips Ahoy! or for other food.” 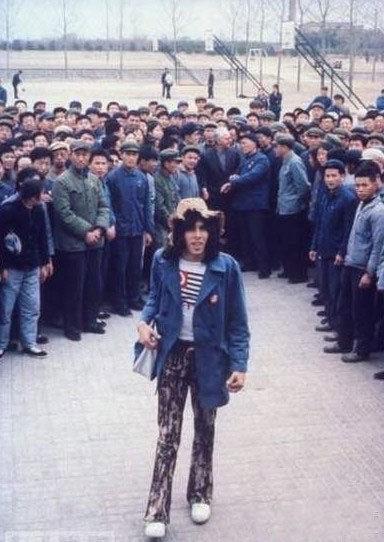 looks like a UFO dropped him @adamminter: This is just great RT @missxq China in picture: An American in China in 1971. twitter.com/MissXQ/status/…