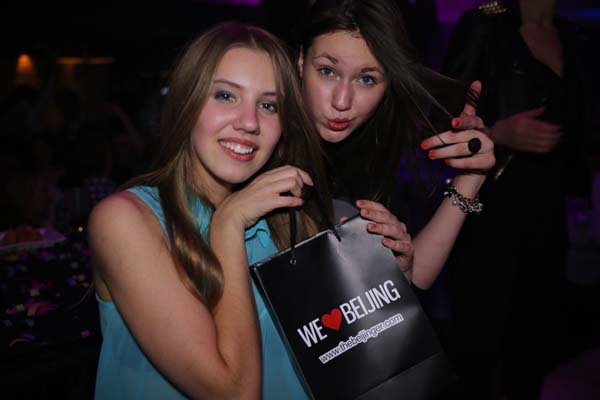 On my Dragon Air flight to Hong Kong this afternoon, we were given the food option of beef brisket rice or chicken with casserole. The casserole featured thin slides of egg between soft slices of potato. Both set meals came with a shrimp salad and bread, and after all that, we were served Haagen-Dazs ice cream. Obviously beverages were free, including red and white wine, and the coffee was brewed from a pot, and on top of all that, THERE WERE OUTLETS UNDERNEATH THE SEAT, AND FLIGHT ATTENDANTS HAD ADAPTERS IN CASE YOUR PLUG WASN’T COMPATIBLE. In conclusion, Dragon Air is the best. Links.

On a scale of “not at all” to “not,” how surprised are you that Yang Rui supports Mitt Romney? “Yang Rui, the host of an English-language news broadcast, found himself in hot water earlier this year for calling for the government to ‘clean out foreign trash,’ and writing about the ‘Jewish bosses’ of the American media and the ‘wrong biased policy of shielding Israel.’ After the debate, Yang Rui wrote, ‘Romney has the upper hand on many topics, in my estimation. Obama seemed weak and young. His opponent was mature and calm, with a mouthful of statistics, clear logic, concise language; he is a very good debater!’ (His post was later deleted for reasons unclear, but you can find a remnant of it online.) // We can expect more Chinese reaction to come. In the next and final debate, on October 22nd, which will focus on foreign policy, a fifteen-minute segment has been set aside for ‘the rise of China and tomorrow’s world.’” [Evan Osnos, The New Yorker]

Foxconn humanized, with photos. “I am not yet going to characterize what I saw, and I am not pretending to know more than I do. This was a few hours out of one day. But what I saw once inside the gate was very different from the picture that ‘Foxconn’ had always conjured up in my mind. I’ll plan to post a series of photos day by day until I’ve conveyed the range of what I saw. If scenes like these conform closely to how you had imagined Foxconn to look, congrats on your insight. They surprised me.” [James Fallows, The Atlantic]

Ya don’t say. “A White House-ordered review of security risks posed by suppliers to U.S. telecommunications companies found no clear evidence that Huawei Technologies Ltd had spied for China, two people familiar with the probe told Reuters. // Instead, those leading the 18-month review concluded early this year that relying on Huawei, the world’s second-largest maker of networking gear, was risky for other reasons, such as the presence of vulnerabilities that hackers could exploit.” [Reuters]

More on China and “currency manipulation.” “Candidate Romney’s repeated promise that he would label China a currency manipulator on his first day in office is well known. But could he really afford to do so? China imported $120 billion of U.S. commodities in 2011, and roughly 1 million Chinese visitors toured the United States that year, each spending an average of around $7,000. Despite China’s slowing economy, these numbers will increase in 2012. Would a President Romney really honor his threat, at the cost of hundreds of thousands of U.S. jobs? Two days before the 2008 presidential election, Obama issued a similar threat to protect the U.S. textile business from Chinese competition. After winning the election, his administration spent roughly four months investigating whether China was, in fact, artificially suppressing its currency. The conclusion? China was not manipulating the renminbi.” [Foreign Policy]

Another award-winning Chinese writer. “The Taiwanese poet Yang Mu (楊牧) has been chosen by an international jury as the winner of the third Newman Prize for Chinese Literature. Sponsored by the University of Oklahoma’s Institute for U.S.-China Issues, Newman Prize is awarded biennially in recognition of outstanding achievement in prose or poetry that best captures the human condition, and is conferred solely on the basis of literary merit. Any living author writing in Chinese is eligible.” [Chinese Literature Today, University of Oklahoma]

Mo Yan will speak the truth. “At the end of the interview the People’s Daily asks Mo the question we all would like an answer to: ‘In your December 10 acceptance speech, what will you say?’ // Mo Yan responds: // I will say things that are real. I will speak the truth.” [China Media Project]

Probably too optimistic an article, but still important for the nut graf. “Chinese government-controlled newspapers have openly criticised the detention of a village official who called for the end of Communist Party rule, an extraordinary move that some media experts see as a sign that Beijing is granting more leeway on free speech. // The campaign is all the more remarkable because Ren Jianyu, 25, was sentenced to a labour camp for posting online messages that called for the downfall of the party’s ‘dictatorship’ – sentiments that would normally mark him out for harsh treatment by China’s media, assuming they gave any coverage at all.” [Reuters]

Belated, from Tuesday. “Besuited and fiercely disciplined, with a powerful family background and experience in the Communist Youth League, Liu Yandong appears much like other cadres jockeying for position in China’s pending leadership transition, bar one very obvious difference: her gender. // She is the only female member of the 25-member politburo and would be the first woman to reach its standing committee, the country’s top political body. Though she is regarded as a long shot, ‘the door is not closed’, said Cheng Li, an expert on Chinese politics at the Brookings Institution.” [Tania Brannigan, The Guardian]

Competition to be “pambassadors.” [Sina]

What tier is your city? Now you can find out with this handy formula. [Dave Lyons, Rectified.name] 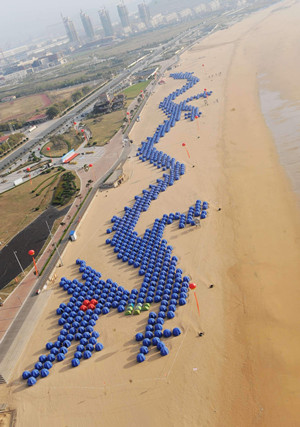 Another world record; via Global Times: A total of 900 tents form the image of a dragon on a beach in Qingdao, Shandong Province on Saturday. Workers from the Guinness World Records went to the scene and certified the dragon as the world’s largest tent diagram.”