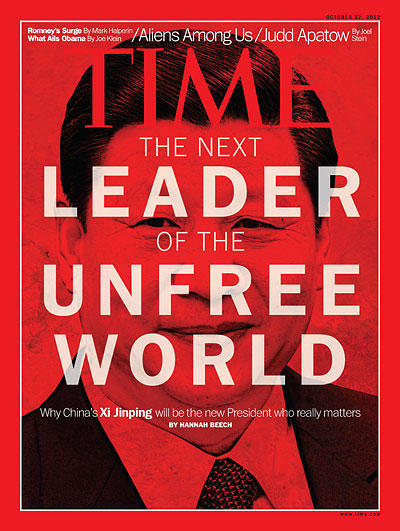 Xi Jinping, you’ve made it: the cover story of Time Magazine, by Hannah Beech (paywalled).

You feel that cold, Beijing? Seeps and settles in the bones, doesn’t it? Until the day central heating comes on, winter is here. Links.

You’ll *never* believe this latest directive from the Ministry of Truth. “State Council Information Office: “To all websites nationwide: In light of Mo Yan winning the Nobel prize for literature, monitoring of microblogs, forums, blogs and similar key points must be strengthened. Be firm in removing all comments which disgrace the Party and the government, defame cultural work, mention Nobel laureates Liu Xiaobo and Gao Xingjian and associated harmful material. Without exception, block users from posting for ten days if their writing contains malicious details. Reinforce on-duty staff during the weekend and prioritize this management task.” [China Digital Times]

The best analysis on Mo Yan so far. “T.S. Eliot was a stone-cold anti-semite. Ezra Pound was a fascist-sympathizer who spent the end of WWII in a cage. Roald Dahl was mean to just about everybody. If we’re willing to accept The Waste Land and the Cantos and Charlie and the Chocolate Factory as the works of flawed men, men who were subject to all of the limitations of their condition, then it seems grossly unfair to condemn Mo Yan for the lesser sin of keeping his head down. The fact of the matter is that there are many excellent Chinese authors who are not banned or in jail. They choose to work within the confines of officially acceptable discourse, pushing at the boundaries wherever they can, because the alternatives are banning, or jail, or at best an honorary professorship in Berlin and the lonely irrelevance of the exile. The people insinuating that Mo and other CWA members are lightweights incapable of writing lasting or eternal literature seem to be saying that such privations are a prerequisite for literary legitimacy — for Chinese authors, at least.” [Brendan O'Kane, Rectified.name]

“Freedom or death” is now a meme, thanks to this man. Pay attention. “25-year-old Ren Jianyu… was sentenced to two years’ of ‘re-education through labor’ for attempted ‘overthrow of the government’ after re-posting comments critical of Chongqing authorities on QQ, a social media platform. With Ren’s appeal finally getting a hearing in an intermediate People’s court, his story has captured the imagination of netizens all too aware of the case’s implications for online speech. // Ren’s mistake, it seems, was little more than using the Internet as any other opinionated netizen might. According to QQ news, from April to August of 2011 Ren re-posted a number of poems, essays, and songs that were critical of Chongqing authorities, all of which have been subsequently deleted. Significantly, Ren acted under his own name, did not author any of these materials–according to Sina, none of the original creators were punished–and he was far from alone in criticizing Chongqing’s authorities. Since then, Chongqing Communist Party chief Bo Xilai and his enforcer Wang Lijun have been removed from their posts and punished for a multitude of crimes.” [Tea Leaf Nation]

Just so we’re clear: Bo Xilai did not go on trial (maybe), Bo Guagua is not in China (maybe), no one knows anything:

Bo Xilai talk: Bo Guagua just said in email to NYT that the news of his arrival in China “is completely without basis.”

Is Bo Xilai getting a court hearing today in Changsha? Court told NYTimes: “There is nothing like that here.”

& Bo Guagua to Guardian: “Like much of the news reported about my family, the rumour that I am back in China is false”

Some source or two gon’ get his ass kicked: “Two sources, one in both Chongqing and Beijing, said Bo Guagua, the 24-year-old former Harrow and Oxford University student, has now returned to China. // ‘Bo Guagua flew back to Beijing last week,’ said a source in Chongqing who has repeatedly provided accurate information on the saga around the Bo family. // ‘He stepped into a police car as soon as he landed and is most probably with the investigation team now. He could potentially appear in court,’ he added.” [Malcolm Moore, The Telegraph]

Corollary: “Yesterday, the Hunan provincial capital of Changsha was merely a dot on the map. Now, thanks to disgraced politician Bo Xilai’s trial not happening there, it still is.” [China Daily Show]

Liao Yiwu says some mean things about China after receiving the German Book Trade Peace Prize in Frankfurt on Sunday. “The author, also known as Lao Wei, added that the Chinese state was a ‘massive scrap heap that must break apart’ and accused the West of ‘colluding with the executioners under the cover of free trade.’” [South China Morning Post]

Uh… “A college student in Nanchang, Jiangxi Province refused to call police after he was sexually assaulted by gays and contracted HIV virus because he felt ashamed. // …”I was totally drunk that night! I couldn’t remember their faces. That’s why I didn’t call the police,” he added. // A Jiangxi judge said no laws have been made to punish a man who rapes another man, but the virus carrier might be fined.” [Shanghai Daily] 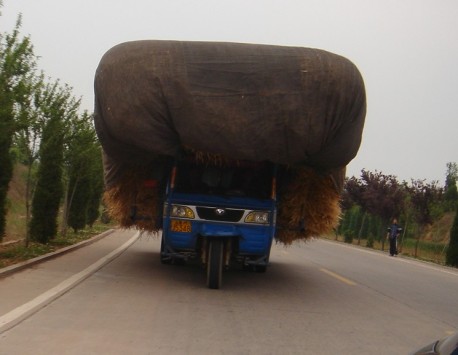 So overloaded it blots out the sun, via Car News China