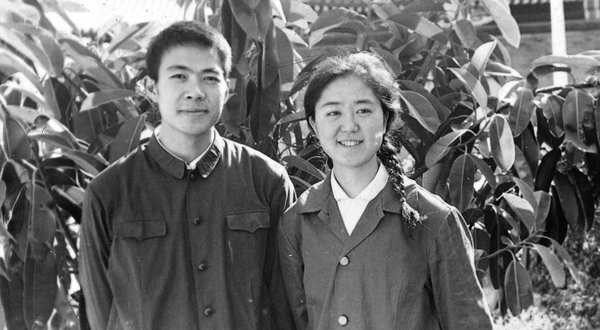 Raise the army banner,
And laugh still more, gazing at the red cosmos,
Spare no effort to move forward.

Before there was Gu Kailai and her legalese, Bo Guagua and his “Ferrari,” Wang Lijun and his flamboyance, Neil Heywood and his business wheelings, and all those salacious, scandalous, and totally unsubstantiated rumors, there was simply a boy and a girl, both born on the wrong side of the political tracks, bound by love. Look at them above, Bo with his modest slouch, Li with her braids, both as innocent as the pristine day. Yet look, too, just beyond the edges, and see the lit match being dragged toward the corner, sweeping aside the safety of shadow to reveal powder kegs of ambition that wait to destroy them — if the smoke doesn’t poison their souls first.

Ms. Li spoke with nostalgia of her romance with Mr. Bo, which began when the two met in 1975, at the end of the Cultural Revolution. Ms. Li said she did not stay in contact with Mr. Bo after their bitter breakup in 1981.

Li Danyu recently gave two public interviews in which she recounted her time with the former Party Secretary of Chongqing.

Ms. Li and Mr. Bo, whose elite families had known each other for years, began their love affair in 1975. Mr. Bo had just endured years of prison during the Cultural Revolution, when his father was purged, and was working in a factory.

Ms. Li, whose family had also suffered, was working as a military doctor. “What he did a lot was he read the selected works of Marx and Lenin,” Ms. Li said. “He was a simple and progressive young man.”

Living in different cities because of their jobs, they wrote letters to each other every three days. In a poem, Mr. Bo ends with lines that reflect both political fervor and romantic feelings…

But fate would not let the two be. Not quite five years after their marriage, Bo went to her one day and said he wanted a divorce. The words were nails through her heart. “I have no feelings for you anymore,” he said that night in the dark quiet of finality, knowing that his tears were a final penance for crimes he had yet to commit, and the crime of this choice: to climb the career ladder with a sharp-witted, brilliant lawyer named Gu Kailai.

Ms. Li refused to grant the divorce, though she moved out of Zhongnanhai. The case went to court. The divorce was completed in 1984. Ms. Gu, in a book she wrote, said she met Mr. Bo that year in Dalian. But Ms. Li said Mr. Bo might have been secretly seeing Ms. Gu when the two were at Peking University, while Mr. Bo was still married.

To try to stop the divorce, Ms. Li told officials that Ms. Gu had destroyed the marriage. In the interviews, Ms. Li said Ms. Gu, a lawyer, had threatened legal action if Ms. Li persisted.

Li never left Bo’s life, exactly. As recently as “months before his fall from power,” Bo summoned Li’s brother for a secret inquiry. Was his own son — the one he had with Li in 1977 — scheming to poison his current wife?

It was paranoia, of course, very simple paranoia. But forged from where? The hottest of cauldrons, in which the fiercest, most combustible elements, like passion, bubble and congeal. “In those early years it was pure love,” Li Danyu recalls. Perhaps, uttering those words, she recalled the first time she saw Bo Xilai, ridiculous in his oversized Mao jacket, skinny as a stalk yet vivacious, good-humored, full of a child’s pep, his eyes aglow with some hidden knowledge. Perhaps she thought of her son, and all those years, raising him, that entwined like a braid so that she could not be sure when one Spring Festival began and when the other ended. Or perhaps she merely thought of a poem, and her name, which her mother had told her was so beautiful that it was dangerous: say it three times and no black-haired, black-eyed man of this world could resist its poison. Red Cosmos. Red Cosmos. Red Cosmos.

Would it work, she had wondered, equally well on those with blue eyes?

One Response to “The New York Times’s Latest Story On Bo Xilai Is A Classic Tale Of Love, Loss, And Poison”