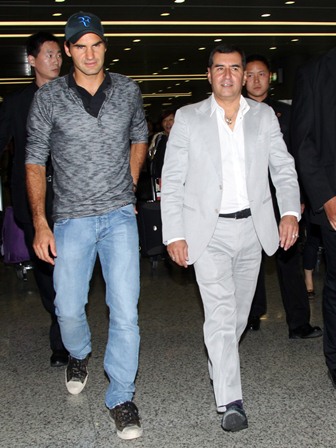 While many of his rivals, including Novak Djokovic, are currently in Beijing for the China Open, top-ranked Roger Federer landed in Shanghai yesterday for an event called the Shanghai Rolex Masters. That’s him above, looking nonplussed about death threats against him posted anonymously on a Baidu message board on Thursday.

Perhaps he didn’t see this picture? 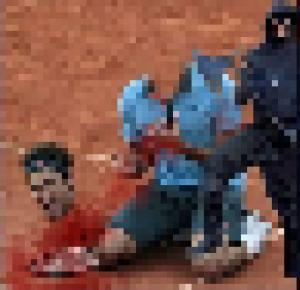 As reported by AFP yesterday, a netizen going by “Blue Cat Polytheistic Religion Founder 07″ wrote on Thursday in a now-deleted post (we think this one): “On October 6, I plan to assassinate Federer for the purpose of tennis extermination.”

The user also posted a picture — crudely photoshopped, it seems — of Federer getting decapitated by a masked axeman. That image has just about been removed from the Internet; we had no luck finding the un-blurred original version, but the above comes via The Liberty Times.

Police and other government agencies have been contacted to increase security around Federer, an official with the tournament’s organising committee told the Shanghai Youth Daily.

“We hope that it was an oral threat only, and the fan won’t take substantive action. However, we have to take it seriously,” Yang Yibin was quoted as saying.

“We have contacted the local police and we will upgrade the level of security for Roger. Meanwhile, we will also protect other players’ security.”