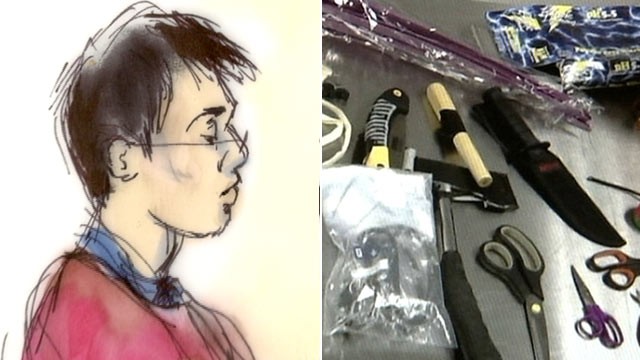 A Boston-bound man wearing body armor, flame retardant leggings and knee pads under his trench coat arrested at Los Angeles International Airport after a Customs and Border Protection officer found a smoke grenade and several weapons in his checked luggage is facing a federal charge for transporting hazardous material on an airplane.

Harris, a naturalized US citizen of Chinese descent, was flying from Kansai, Japan, via Incheon, South Korea. Customs officers in Los Angeles’s LAX Airport stopped him last Friday. He admitted to possessing a knife, but neglected to mention that he was also carrying “three leather-coated black-jack billy clubs, a collapsible baton, a full-face respirator, several knives and a hatchet.”

The smoke grenade, manufactured by a company called Commando, is classified as an explosive and is capable of filling a 40,000-cubic-foot space with smoke, according to the affidavit. The grenade is also capable of causing a fire.

On Harris’ laptop, investigators found Japanese fantasy rape writings, pornography and a copy of the “Poor Man’s James Bond,” a popular text among dissidents and anarchists that has exhaustive information on the use of terror tactic, according to ABC News.

Maybe he was coming from the Guangzhou sex festival, suggests BJC contributor Alicia.

Harris has been detained and charged with one count of transporting hazardous material on a plane (apparently not allowed!). He’s been mum so far about his intentions, and has gotten a lawyer.