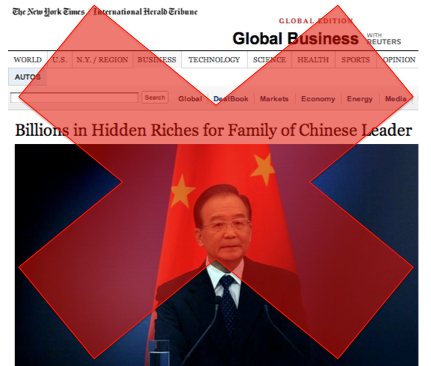 While everyone else was talking about Ai Weiwei, the New York Times had the temerity to publish an explosive report about Premier Wen Jiabao, probably the most popular and ostensibly clean politician in China. Grandpa Wen, as he’s affectionately called, has apparently made a lot of money for his family, but that should come as no surprise to anyone. But the Times is currently in Chinese Internet purgatory because it painstakingly detailed exactly how much money: “A review of corporate and regulatory records indicates that the prime minister’s relatives, some of whom have a knack for aggressive deal-making, including his wife, have controlled assets worth at least $2.7 billion.” And it’s $2.7 billion that Wen’s family has taken pains to not disclose.

In case you’re wondering: no, the Foreign Ministry has not answered the NY Times’s calls.

You’ve already probably read the article, but we’ll go ahead and leave just this one excerpt:

The apparent efforts to conceal the wealth reflect the highly charged politics surrounding the country’s ruling elite, many of whom are also enormously wealthy but reluctant to draw attention to their riches. When Bloomberg News reported in June that the extended family of Vice President Xi Jinping, set to become China’s next president, had amassed hundreds of millions of dollars in assets, the Chinese government blocked access inside the country to the Bloomberg Web site.